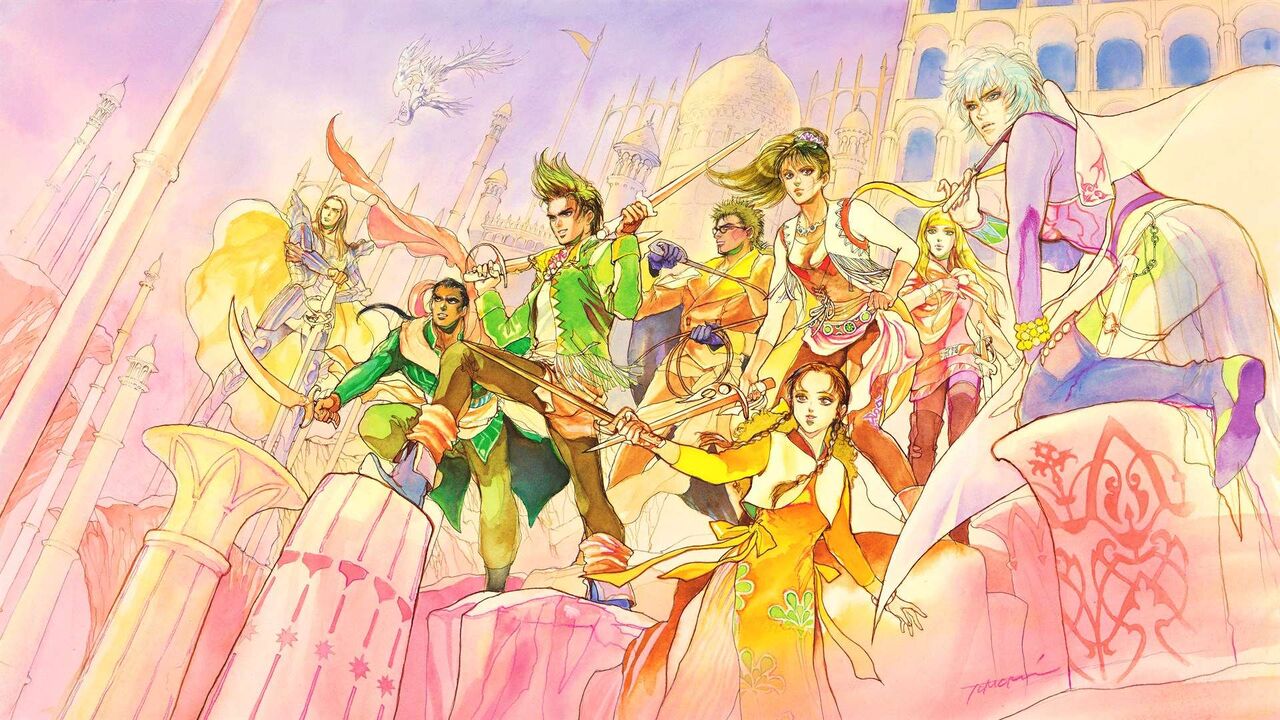 Well now I had beeen saying for awhile now I would get to SaGa Frontier 2 at some point and now well just yesterday I finally started officially playing it. I have to so from the bit of time I played that game is really awesome a underrated PS1 masterpiece of ya ask me the gorgoeus water color hand drawn scenery is sooo nice. I already kneew the music was great as I listened to muchj of the OST before playing. So Soon this wiki should be getting more data on SaGa Frontier 2 because gosh does this place need it.

Also eh I am curious has anyone here played even a bit of Saga Frontier 2? Because I wanna ask is it worth it to equip my characters with steel equipment? I see steel don`t break but most accessories I see for it lower SP by a bit on a character is the loss of SP worth it? I mean I`d much rather have unbreakable steel than breaking stiff but ehh on other end I dunno. ANother question I have is..Where in the world is the money in this game at?

Ah this game barely gives any cash to buy new stuff haha I am having nightmares of playing Romancing SaGa 1 again it was nigh impossible to gather money to buy good stuff as monsters dropped so little. Are there any bugs or glitches I can exploit to earn extra money here? Like Romancing SaGa 3 had an infinite money glitch I always used to get money in the game. Because I will run through and break weapons like it`s water because I fight monsters very often to level up stats and gain new abilities sometimes I clear out whole screen worth of enemies heh XD so I need to know ways to get cash in the game and keep atlest enough to replace whats broken...Ya know that steel equipment setup is not sounding so bad now.

Onde hint I can give you is to grind whenever you get the chance, because of the scenario system in this game it is very easy to enter a situation where you're underleved (especially in the final dungeon).

Hm grind a lot when I get the chance? Ah okay got it I`ll keep tht in mind cause the last thing I need is to be stuck in a place.

Emuparadise has quite a bit of interesting stuff besides roms, check these: [1], [2]

At some points in the game some cities will be open on the map outside of scenarios, those are are a great opportunity to grind. You'll definitely want to learn new techs as fast as possible.

Oh nice! Do you like the style so far?

((Awww... I can't strikethrough on mobile xD)) You guys should come to the discord chat. You'd get answers and suggestions a lot faster. ;) There's maybe 10 people now? XD

Yes!! I absolutely love the style of the game!! Ah i`ll tell you more bout it on Discord you have got to try this game when get chance Holymoongrinder!

Okay! Sounds good! I should be a bit more free to talk starting Monday!

Ah Monday? Okay sounds awesome! ah and I added 2 much needed pages here for SF2 as you can see heh. As I find more I`ll be sure to add it here for SF2 cause it sure does need it.

I never could get into 2 as a kid at all. I wanna go back and replay it as an adult now, maybe my tastes have changed now.

What do you think?