Alloces (アラケス, Alloces?) is a character from Romancing SaGa 3.

He is one of the abyss lords with him being the lord of Earth. His true form in the abyss is that of a man with blond hair and wielding weapons along with having a cape and gauntlet on his right arm

Alloces in his false form relies on physical techniques and Earthquake hit to hit all members of the party. Having a strong physical defense works well. In his true form he uses more physical techniques like Screwdriver which does a significant amount of damage to females. In both forms having the Earth element be the active element on the field heals him. The strategy for both forms isn't too different, have a strong defense and change the field using magic. 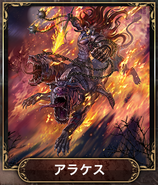