Asellus (アセルス, Aserusu?) is one of the main protagonists of SaGa Frontier. Her home region is Shrike.

Asellus appears as a humanoid woman with green hair.

Prior to the events of the game, Asellus was a human woman who had been run over by a carriage and was on the brink of death.

Asellus was saved from certain death by a transfusion of Mystic blood, and became the first and only Human/Mystic half-breed on this world. Athough she is grateful to Orlouge, the Mystic whose blood saved her life, Asellus wonders whether she is really Human or Mystic.

When she woke up, she had become the world's first half-mystic. Orlouge called her and ordered Ildon to watch her, while ordering one of his princesses, White Rose, to teach her the mystic customs. Asellus eventually decides to run away when Ciato mentions a guy who could take her out of Facinaturu. White Rose goes with her, and the two manage to escape. She tries to go back to her home, but finds out that twelve years have passed ever since her accident.

As a half-mystic she has the ability to gain stats and skills just like other humans but can also absorb monsters like a mystic and when she uses mystic equipment she turns into a mystic and thus can't learn any sword, martial or gun arts while in this form but can use the mystic abilities linked to her mystic equipment.

She has three endings in her scenario and can be recruited in Emilia's scenario by going to Trinity on your fourth mission and temporarily in Red's scenario on the Cygnus when it is being raided by the pirates.

Human Ending: Never use Asellus' Mystic equipment and save Gina from the Dark Labryinth and beat Orlouge and it will shows an old Gina visiting Asellus' grave and Ildon, White Rose, Mesarithim and Rei talk about how Asellus' denied eternal life and shows Asellus' life from being old and showing her grown-up children to being young and the final picture being of Asellus', White Rose, Mesarithim, Princess Lion and Rei in a picture and the pictures shows she has reddish hair as her natural hair and one interesting thing is that she is shown being married to a man but when she reads the hentai book in Shrike she is flustered by it so it may suggest she actually Bisexual.

Half-Mystic Ending: Either A)Never or rarely use Asellus' mystic equipment but don't save Gina or B)Constantly using Asellus' Mystic equipment and save Gina(remember to stop by her house before going to Orlouge to register the event of you saving Gina or it will probably cause you to get the Full Mystic Ending) and it will show Gina as an old lady speaking to her grandchildren and being told by her (presumeably) own child telling her she will be a grand mother and after the grandchildren and child leave Ildon, White Rose (there are more I don't remember) and a (presumeably and i'm not talking about the Half-Mystic Asellus' part) Half-Mystic Queen Asellus' and the picture from the Human Ending of Asellus, White Rose, Mesarithim, Princess Lion and Rei in a photograph and in the ending Fuse's Case File on Asellus she is shown as being a Half-Mystic meaning this ending could be the official one.

Full Mystic Ending: To unlock this ending, always use Mystic Equipment, don't save Gina and it will now show Gina in royal clothes and Asellus teleports in and talks about conquering all mystics and even humans and mechs(what about monsters Asellus, why won't you conquer them to?) and getting 200 princesses and Gina being the first one and Rastaban teleports in and would like to serve Asellus and asks about what to do with Orlouge's princesses and she says they should be laid to sleep in their coffins forever(Sh*t luck White Rose, hope Princess Lion can escape seeing she is a good fighter) and Ildon appears and Ildon says she is worse than Orlouge and Asellus tells him to go away and right before he does so he says that Facinataru is going to ruin and it ends with a Asellus laughing a noblewoman laugh indicating the incoming tyranny. 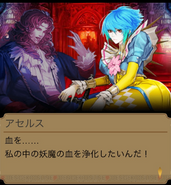 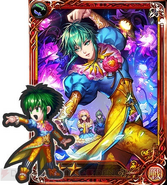 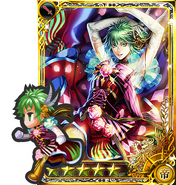 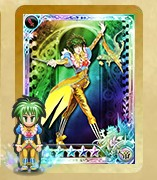 Asellus appears as an obtainable card.

Asellus appeared as an obtainable character.

Asellus's outfit appears as a costume.

Asellus appeared as an obtainable character. 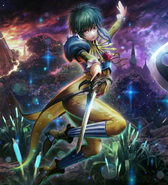 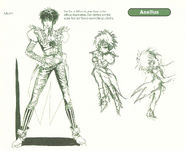 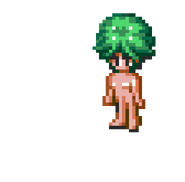 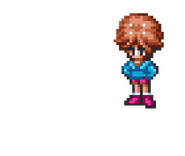