Aunus (アウナス) is a character from Romancing SaGa 3. He is one of the abyss lords with him being the lord of fire. In his true form he seems to be the oldest of the four as he has an elderly appearance.

Aunus is not to be taken lightly in his first encounter he uses many flame based attacks and he cannot be attacked by any physical attacks as he always has Self Burning, using Waza such as Split Body (Sword), Firecracker (Epee), Double Dragon Wave/Meteor Strike (Spear), Sky Drive/Tomahawk/Yoyo (Axe) or any bow Waza/Magic. He also can charm your team so look out for his charm attack. Self burning is also useful for this battle as he uses Fire Wall which hits all allies in a line, another strategy is to place a character resistant to fire attacks or equipped with armor which resists fire on the front lines to absorb the blunt of the damage using the formations Desert Lance or Tiger's Cave. Aunus will recover HP if the field is covered with the fire element. In his true form the battle can be fought in the same fashion as the first except this time he is much stronger than before so magic like reviver can come in handy here. He also wields the Death Sickle technique which can instantly kill an ally, learning the evasion from enemies like Oannes will help. 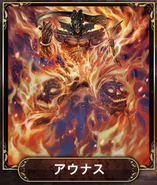 Aunus as he appears in Romancing SaGa Re;univerSe
Add a photo to this gallery

Retrieved from "https://saga.fandom.com/wiki/Aunus?oldid=36748"
Community content is available under CC-BY-SA unless otherwise noted.