Balmaint (バルマンテ, Barumante?) is one of the main protagonists in SaGa Scarlet Grace: Ambitions. A legal executioner from the Cohan Castle in the land of Kei. He succeeds his family predecessors as an executioner.[1]

"An executioner is no stranger to death. Some face Balmaint's axe with anger, others with fear and resignation. Still, he treats each with the respect and dignity they are due."
—In-game description
This article is a stub. You can help SaGa Wiki by expanding it.

Cohan Castle administrator Sigfrei started a rule-by-fear regime, executing many soldiers, politicians, and even normal citizens. The one who carried out those executions was Balmant. Sigfrei himself was also seized by political opponents and taken to Balmant to be executed. Sigfrei left with the parting words, “I will be resurrected seven times and show you the justice I will bring to this world,” and while still smiling had his head removed. Before long, rumor of Sigfrei’s reappearance reached from everywhere to every man. The wandering Balmant goes on a journey in search of Sigfrei in order to remove his head seven times.[1]

Balmant's base stats may change based on the quiz taken at the beginning of the game. If recruited in another scenario, his base stats will be the leftmost stats in the table above.

Balmant appears on a banner. 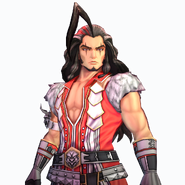