Blue (ブルー, Buruu?) is one of the main protagonists of SaGa Frontier. His home region is the Magic Kingdom. Born a Twin with an affinity for magic, Blue is able to access powerful spells. However, these powers have been divided between himself and his twin brother, and therefore Blue can currently reach only half of his full potential. According to the customs of this land, Blue must confront and destroy his twin brother in order to attain his true strength.

After graduating from the Magic Academy in the Magic Kingdom, Blue uses the RegionMap to travel to Devin and Luminous to start the Rune/Arcane and Light/Shadow Quests. After obtaining two gifts, he will either go after Space Magic or Time Magic. To get Space Magic, Princess Rei teleports him from Devin to Kyrin Paradise, where he must go through a maze. To get Time Magic, the Ring Lord Virgil teleports him to the TimeLord's Region

In any event, to obtain these gifts, he either defeats Kylin or TimeLord in combat.

After getting these gifts, he confronts Rouge in a magic duel. The winner travels to the Magic Kingdom and sees it in ruins. Traveling through the ruins, he learns that he was divided into Blue and Rouge in order to master all of the schools of magic. The seal to Hell was broken, and he travels there to defeat Hell's Lord.

Red meets Blue on the Cygnus as it is being hijacked by Nomad and her pirates. He and Fuse invite him to join, but Blue refuses because he does not like Red's name.

Blue appears as an obtainable character.

Blue appears as an obtainable character. The regular versions of Blue are obtainable as gacha units from the regular gacha pool.

Blue appears as an obtainable card. 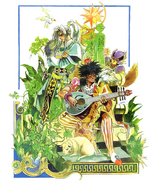 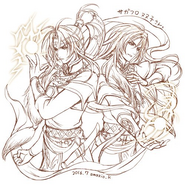 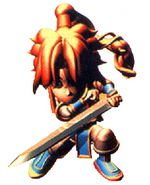 Retrieved from "https://saga.fandom.com/wiki/Blue?oldid=35908"
Community content is available under CC-BY-SA unless otherwise noted.