Buné (ビューネイ, Byūnei?) is a character from Romancing SaGa 3. She is one of the four Sinistrals, with her element being wind. She is also the only female of the group, and her fake form being the most human looking out of the fake Sinistrals. She can be fought two different ways depending on which way you choose. She can be found at Buné's Den and at the Final Abyss Gate.

Buné's shadow is a long blonde haired woman with pointed ears in a purple dress, seen riding a 3 headed beast, the more the beast takes damage, the heads of said beast takes shape of the 3 monsters she keeps in her lair. Buné's true form in the Abyss holds similar appearances to her shadow except she is not riding a beast and is wearing a red kimono along with 3 spirits flowing around her. Out of all the Sinistrals, she is perhaps the only one whose True form is similar to her shadow the most next to Aunus.

"Another of the four Sinistrals, there was the Dragonlord Buné, who built her foul nest on Taftan, claiming the skies were her own. Smiling vilely at those below from her mountain home, Buné heard the Matriarch's challenge. But her wickedness knew no honor and she refused to come to the valley below. he Matriarch sought out a legendary beast, the dragon called Dora dwelling in Mount Louv. Astride the dragon, the Matriarch took to the skies and their combined might made short work of the Dragonlord! Sending Buné back into the Abyss..."
—The Minstrel's tale about the Matriarch defeating Buné

Buné is not all that hard and depending on which way she is fought can determine how it goes. If you choose to fight her the normal way she will have a bit more HP, and after awhile of getting hit some faces will begin to come from the serpentlike things wrapped around her body, adding to the amount of times she can attack and also making her attacks stronger. But with use of powerful techs and magic this should not be much of a problem, the biggest threat she poses is her Earthlyzer technique, however rearranging characters so that it only hits the front line can circumvent that. If fought the other way, which involves Gwayne, she will show up with less HP and will be much easier, as she will mostly aim her attacks at Gwayne. Gwayne does have a lot of HP but will die if she takes too much damage. Use of the wind magic Dancing Leaf can help avoid some of her attacks, since this is a one on one battle. In her true form she is much stronger and can attack up to five times on some turns. Things to look out for are her stare attack, as it can charm party members. This can be very dangerous since by now powerful techs will be gotten like Golden Dragon etc. She also uses Fast Nebula, as well as her personal move: Trinity Blaster. Shadow Servant and Reviver will make the fight easier. Dragon Inferno can also take off a bit of HP from her. One can also exploit her usage of Fast Nebula and Trinity Blaster by having a character be use a combination of Shadow Servant and Matador (Epee). It is best to have a main healer here too or if the player has found life canes, which there are more than enough throughout the game, as she attacks many times and her Trinity Blaster, unlike in her fake form, charges faster sometimes so she can use it without even waiting a turn. 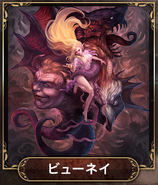 Buné appears as a character. Her likeness is portrayed by Moemi Katayama.

Buné's outfit is obtainable as a costume duering the Emperors SaGa collaboration.

Buné appears as a cameo character. 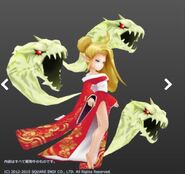 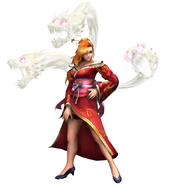 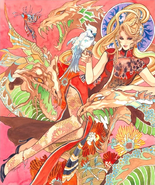 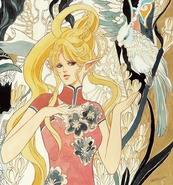 Byunei in her fake form.

Byunei in her true form.