Lute meets Hamilton in the restaurant in Owmi, and she invites him aboard her ship. When Lute speaks to her in her quarters, she explains that Mondo had betrayed Lute's father and joined Trinity. She then invites Lute to help her take down Mondo in his base in Wakatu, and joins the party.

She and Lute infiltrate Mondo Base, ultimately fighting Mondo in his Spriggan mecha.

Hamilton is in the restaurant in Owmi. She comments about the food, but does not join the party.

Hamilton appears as an obtainable character. 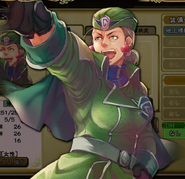