He can be recruited in the Old Town section of Pidona following the completion of Muse's subquest.

Muse lives in the slums of Pidona (also known as the 'Old Town') where she cares for many of the young children in the neighborhood. At the start of the game, Muse is bedridden with a mysterious illness, and is cared for by her presumed lover Charl.

Muse is the daughter of General Clemens of Pidona. When King Albert died there was a fight over who was to be the successor, and it lead to Ludwig and Clemens fighting over who should rule. On the outskirts of Pidona, Clemens' army routed Ludwig's and Ludwig conceded defeat. 5 years after Clemens' victory, he was assassinated by a member of the Divine Church and Ludwig succeeded to the throne. Due to the fight Ludwig had with Clemens, and the animosity that followed, the Claudius family's assets were taken from them and forced into poverty.

In an early quest, one of the neighborhood children wanders into the nearby Devil King Palace and gets lost. Charl volunteers to rescue him, and the player goes along as well.

Later in the game, it is revealed that a member of the Divine Church tricked Muse into drinking a potion that she believed would cure her illness. Instead, the concoction causes her to fall into a deep sleep and become trapped in a dream world. Inside the dream world, Muse is tormented by nightmares of Sir Clemens, her deceased father, and pursued by a beast called the Dream Devil who wishes to devour her soul. Charl vows to rescue Muse from her nightmare, and drinks some of the remaining potion in order to follow her into the dream world. The player may choose to accompany him, but may only bring four members of the party into the dream world, as Charl explains there is only enough potion left for five people (including himself). Inside the dream, Charl and the party locate Muse, who is touched that her friends felt strongly enough for her to risk their lives. Together, they confront the Dream Devil, who disguises himself as Sir Clemens and tries to persuade Muse and Charl to remain with him in the dream world. The main character forces Muse and Charl to snap back to reality and see through the Dream Devil's illusion. Then, the battle begins.

If Muse is present in the battle, the Dream Devil will transform into Sir Clemens in the middle of the fight and call out to Muse. However, Muse does not fall for the trick. Accepting that her father has already passed away, Muse sees through the Dream Devil's disguise and delivers the final blow to the beast. After the monster is defeated, Muse is released from the dream world and immediately recovers from her illness. At this point, both Muse and Charl can be permanently recruited into the player's party.

In order to recruit Muse, the player must complete both of the sidequests that involve her. First, the player should travel to Pidona and speak to Thomas in his house. Thomas will refuse to join the party and say he has other business to take care of. Upon leaving Thomas' house, the player will see him walking into the southern part of town. Follow him south one screen and immediately enter and exit any building in the area. When leaving the building, the player will see Thomas walking to the west. Follow him once again to reach the Old Town of Pidona. Enter the house in the southwestern corner of the screen to begin the quest to rescue Gon. If your main character is Thomas, you can skip all of the above steps and simply go directly to Muse's house in the Old Town.

Later, once the main character has at least 250 HP and has completed the quest to save Gon, the player may return to Muse's house to begin the dream world quest. If you have more than four characters in your party (including the main character), Charl will instruct you to choose four people to accompany him. Any character(s) that are not chosen will not be able to explore the dungeon. In addition, if the player leaves the main character behind, the quest will complete automatically, but the dungeon cannot be explored at all. This is generally not a recommended strategy, as the dream world is an excellent early game grinding spot, and it contains the Silver Hand, which is a crucial item to find if the player plans on using Charl in the main party. Once the quest is completed one way or another, the player can speak to Muse and/or Charl to recruit them. If either character is forced out of the party at a pub, they will return to Muse's house in Pidona where they can be recruited again.

Charl appeared as an obtainable character.

Charl appears as an obtainable character.

Charl appears as an obtainable character.

Charl appears as an obtainable card.

Charl appears as a character. His likeness is portrayed by Atsuhiro Satō. 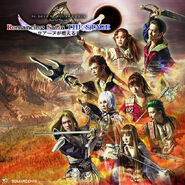 Charl lost his right arm as a punishment for refusing to swear loyalty to Ludwig, And wearing metallic arm (Silver Glove) to support his disability. His in-game sprite is shown to have both arms intact.