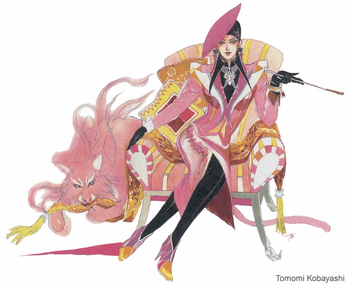 Cindy Campbell (Arachne) is a villainess from Red's storyline in SaGa Frontier. The CEO of the BUCCI brand of bags, she is actually one of the Four Emperors of BlackX, using her company as a facade for smuggling illegal weapons.

Red discovers a shipment of weapons onboard the Cygnus ship and goes after her for answers. Helped by the IRPO agent Fuse, they interrogate her but are unable to get satisfactory answers. When Red returns to Cygnus, the ship is attacked by pirates sent by Cindy to get rid of all evidence connecting her to Black X. Red is once again helped by Fuse, as they free the ship from the pirates. Later on they assault her building, finally fighting her as she morphs into a spider monster, but she ends defeated. She appears again in Black X's base, having been revived by Dr. Klein to fight Alkaiser, but she ends defeated again.

Arachne as an event boss in Imperial SaGa