Claudia (クローディア, Kuroodeia?) is one of the eight main characters in Romancing SaGa and its remake Romancing SaGa: Minstrel Song. She was born in Mazewood and can be found in Melvir, Aurefont and Altours.

She is voiced in English by Karen Strassman and in Japanese by Yuko Minaguchi in the remake.

Claudia has long brown hair, sports an orange/green combo dress, covered by a green vest with blue markings, and has multiple green fabric pieces on her forearms and calves.

Claudia seems to have a large connection with nature, due to her being raised by Eule in Mazewood. She is a very compassionate character, and she views Eule as a mother figure.

Claudia is an orphan that was raised by Eule, the witch of the forest. Claudia spent her entire life in Mazewood, where she lived among the creatures of the forest, with Eule being the only human besides herself living there.

One day, Eule senses monsters near the entrance to the forest and sends Claudia together with the bear Brau and the wolf-like creature Sylvan to take a look at the situation. Upon reaching the entrance, she witnesses Gian, an Imperial Knight of the Bafal Empire, get attacked by monsters. Claudia helps Gian fight the monsters off. Gian thanks Claudia for the help, but seems a bit surprised when she tells him her name. He also notices an odd looking ring on her finger, calling Claudia "a little overdressed for the forest". Gian proceeds to hand Claudia a map of the Bafal Empire. Before leaving, he tells her to visit him at Elisabeth Palace should she ever be in Melvir.

When Claudia reports back to Eule, the witch isn't too pleased that Claudia got herself involved with someone else's troubles, but tells Claudia to make use of the map Gian gave her. She tells her to go explore the world and go wherever she wants with the one condition that, if Eule should ever need her, Claudia would return to the forest immediately. Claudia promises to do so, and leaves Mazewood together with Brau and Sylvan.

When she meets Gian at Elisabeth Palace, he introduces her to Lord Neville, who orders Gian to find a bodyguard for Claudia. Gian himself isn't allowed to look after Claudia, since his services are needed at the court for the time being. He only gets to find an inn for her and guard her till the next morning. While not exactly pleased with the entire situation, Claudia accepts it. The next day Gian introduces Claudia to Gray, whom he deems trustworthy to accompany Claudia on her journeys.

Warning! the following Paragraph contains Spoilers regarding Claudia's past.

At one point while staying at an inn, Eule contacts Claudia, telling her to return to Mazewood. As Claudia arrives there, Eule reveals to her that she is dying. Before Eule's time is up, though, there is something she has to tell Claudia. Claudia is not an orphan, but actually the daughter of the emperor of the Bafal Empire and rightful heir to the throne. The reason that she was given to Eule was to protect her from assassins, sent most likely by the Duke of Loban, an ambigitous man who is married to the emperor's sister.

With her last words, Eule tells Claudia to go visit the giant tree in the center of the forest. When Claudia is about to leave the forest again, Brau and Sylvan hesitate. Eule sent them with Claudia to watch over her and protect her, but they are creatures of the forest and Claudia no longer needs to be protected. Claudia leaves Mazewood to continue her journey, this time without Brau and Sylvan.

Note: Recruiting Claudia unlocks Melvir, Aurefont and Mazewood. Unlocking her can be challenging, as the only easy way to make ventures between Melvir and Aurefont, is to recruit Gray, whom always shows up with Claudia anyway. There is an option to unlock Melvir by going from Rosalia to the Dry Lands, but that poses other problems.

True to her concept art, Claudia is the best with a bow in her hands. Her Dexterity increases frequently and her Agility growth ensures that she can act very quickly, while her other stats advance at an average pace. Her high Dexterity also allows her to dabble in Foilery, though her low HP and Vitality make her a poor choice for the front row.

Claudia appears as an obtainable character.

Claudia appears as an obtainable character. 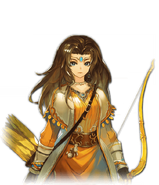 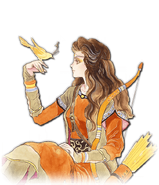 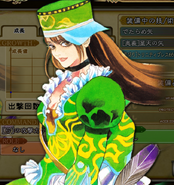 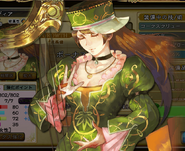 Claudia appears as an obtainable character. The regular versions of Claudia are obtainable as gacha units from the regular gacha pool.

Claudia appears as an obtainable card.

Claudia appears as an obtainable character as part of a crossover promotion with Emperors SaGa. Her appearance is based on her original design. Her attribute is Earth and her leader skill is Hunter Shift (ハンターシフト, Hunter Shift?). Her Brave Bursts are Everyone dies arrow (皆死ね矢, Everyone dies arrow?) and Dream Bow (夢想弓, Dream Bow?).[1][2] 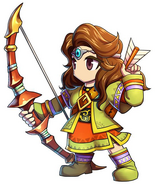 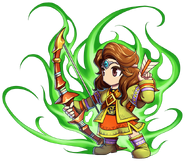 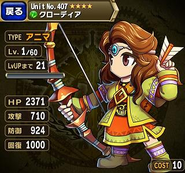 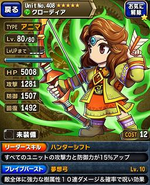 Sprite.
Add a photo to this gallery 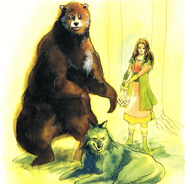 Retrieved from "https://saga.fandom.com/wiki/Claudia?oldid=30816"
Community content is available under CC-BY-SA unless otherwise noted.