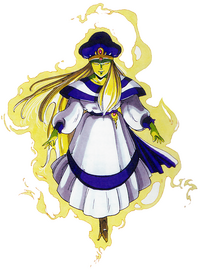 "How amusing.... You are trying to pick a fight with me! Are you sure? It's the destiny of mortals....Very well. Remember the greatness of my power!"

~ The Creator before transforming to fight the protagonists. - The Final Fantasy Legend

The Creator (かみ, Kami?) was a being who had originally created humanity, the Tower, Ashura, and masterminded all the events that plagued humanity from the very beginning.

The party meets him several times throughout the course of the game in his mortal form, as he gives hints on how to break the seals on the doors. When the protagonists meet him in Paradise, he congratulates their victory and reveals his role as the cause of the troubles plaguing humankind. He describes how he believed humans didn't understand courage or determination and an so created Ashura to put that notion to the test and see how humanity would cope. Pleased with their success as the first to complete his "game", the Creator offers to grant the heroes a wish of their choosing, which is quickly refused by the protagonists. He justifies that as the creator of the world he was allowed to do what he wished, but was vehemently insulted by the heroes who refused to accept the Creator's evil and manipulative nature. Offended that he was willing to cause so much suffering in the worlds, the protagonists proceeded to battle the arrogant god and after much effort, managed to destroy him and free the world from his manipulation.

Retrieved from "https://saga.fandom.com/wiki/Creator?oldid=36604"
Community content is available under CC-BY-SA unless otherwise noted.