Dantarg (ダンターグ, Dantāgu?) is one of The Seven Heroes. He is a boss in Romancing SaGa 2. Dantarg is an battle-hungry warrior that has no interest in the Seven Heroes' attack on humanity, only in assimilating monsters to make himself stronger. He can be fought in four different forms and gets stronger as the player progresses. He can be encountered in different dungeons depending on the player.

Dantarg appears as an obtainable card.

Dantarg appears as an enemy boss.

Screenshot.
Add a photo to this gallery 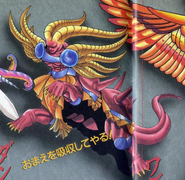 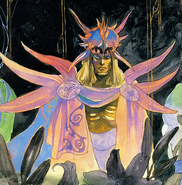 Artwork of Dantarg in Imperial SaGa.

Artwork of Dantarg in his monster form in Imperial SaGa. 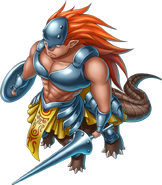 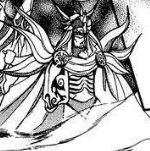 Dantarg as depicted in the Romancing SaGa 2 manga

Dantarg as depicted in the Romancing SaGa 2 manga

Dantarg from the Romancing SaGa 2 manga

Dantarg's appearance for Square Enix's arcade-based TCG: Lord of Vermilion
Add a photo to this gallery

Retrieved from "https://saga.fandom.com/wiki/Dantarg?oldid=32456"
Community content is available under CC-BY-SA unless otherwise noted.