Death (デス) is the eldest of the three Gods of evil in Romancing SaGa.

Upon losing the Battle of the Gods, he returned to the netherworld as the guardian of the dead. Death takes his job very seriously even to the point of stopping the Soulgutter, one of Saruin's creations. He was requested to aid in the return of his brother in the conquest and the subsequent destruction of Mardias by one of Saruin's Minions. He cannot directly aid in his brother's aims for fear of retribution from Elore. He did however try to aid his brother by releasing the most powerful soul he housed in Purgatory, which did not have the results they expected. The soul was that of Darque, an assassin from three hundred years prior. Unbeknowst to Death he also released Aldora the Wizard, who was housed within the same body as Darque. Their personalities are in conflict as they try to recover lost memories within the same body and you can chose which one you wish to recruit. Death fears another war with the Gods and aids the Heroes when they seek his help. He gave them access to Purgatory to recover Aldora's memory, in addition to trading souls for items as well as a portion of their lives for strength and salvation for fallen allies. He goes as far as to tell the place where Saruin was sealed, as Elore and the Giants failed to do so. He tells them to seek out the Isthmus home of Albert, for that is where Saruin sleeps and bids the Heroes farewell.

In the SNES original, Death can provide his sevices to the player. He will tell you Saruin's location without anything in return. If you ask him to bring Galahad back to life, you will also unlock Frosthold Fortress right away, supposedly as a setback, though this grants access to the Obsidian Sword. Lastly, you can ask for him to grant you a powerfull weapon. In return, he will ask for the life of the second character in your party. You can either refuse, accept his offer, or kill him in a fit of rage at his proposal. Killing Death grants access to his two chests, guarding his Sword and Armor, the latter being the best armor in the game. Death's Sword has the same stats as the Obsidian Sword, aswell as the same special move (learned four times with one energy point), Dark Wave, which is the exact same move as Meteor Blade.

In Minstrel Song, Death can return dead characters to life (which costs the protagonist 1 LP permanently and is the only way to unlock Frosthold Fortress before reaching ER 22). The player can also trade LP for a sword or armor; it is possible to bring along party members who the player did not train for the trade and Death draws LP from the party member closest to the protagonist. However, the items offered by Death are not of particularly impressive quality, so it is advisable to skip trading LP for either. Also, Death can tell the player where his younger brother Saruin is so that the player can confront him. He also can unlock Purgatory in Aldora's quest.

Death appears as an obtainable card. 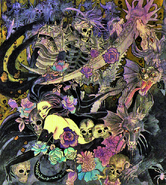 The Fight Against Death

Artwork of Death in Imperial SaGa.

Shin Emperor Death card in Imperial SaGa.
Add a photo to this gallery

Retrieved from "https://saga.fandom.com/wiki/Death?oldid=36729"
Community content is available under CC-BY-SA unless otherwise noted.