Elore (エロール, Elore?) is a character from Romancing SaGa and its remake, Romancing SaGa: Minstrel Song. He is the God of Light and creator of humanity (basing them on Nisa's creation, The Taralians) and the Fatestones.

Elore wears a white helmet, a white cloak, shoulder pads, numerous white fabrics, and all of those accessories have purple and gold markings. He is seen with a bird in his official artwork. In Mardias, he takes the form of the Bard, or Minstrel in Minstrel Song.

Elore, almost like the polar opposite of Saruin, is shown to be quite compasionate to his creations. His unwillingless to fight Saruin due to the great chaos it would bring to the world is a good example of that. During the Trials of Elore, he exclaims that the humans have a choice to do whatever they please, and does not force them to do his own bidding, again, much like the opposite of Saruin, who used his creations for his own sake, which is why most of them betrayed him.

The Father of all the current Gods, He was born from Saiva's finger, to turn the tide of battle during the War between Marda and Saiva. The needle used to create Elore became the Left-Hand Sword/Main Gauche. However, Elore sided with Marda and Saiva was defeated.

He dons the guise of the Minstrel and guides the Heroes along the path of salvation for mankind, offering advice with his knowlege of the past. Elore will no longer directly do battle with any of the other Gods. The battle between the Gods destroyed the world, pitting different races against each other. Thus, the world was left scarred and many other races as well as the Gods died out. Elore and Nisa being the only God that survided the great battle, he brought harmony to the world once more.

Moments from the Trials of Elore quest

Elore appeared as an obtainable character. 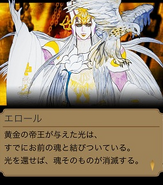 Elore appears as a raid boss.

Artwork featuring Mirsa, Aldora and the rest of his party being chosen by Elore in his minstrel guise.