Fei-on (フェイオン, Fei-on?) is a character from SaGa Frontier. He is a human male in who protects a community inside Tanzer. As can be noted from his artwork, he is a skilled martial artist and learns many Martial Arts quickly among the human males. Liza is his match among the female humans when it comes to sparking arts in the same category.

Riki and Mei-Ling encounter Fei-on after their ship is swallowed by Tanzer. Dialog reveals that Fei-on and Mei-ling were in a relationship, and he was traveling to Kyo when his ship was swallowed. Riki and Mei-ling are looking for a ring, and Fei-on leads them to Nomad's lair. They defeat Nomad's goons, and rescue her from Tanzer's heart (Fei-on joins the party prior to entering the heart chamber, insisting he help directly).

The battle causes Tanzer to spit out the ship, and they all escape together with Fei-on as a permanent part of the team.

The party meets Fei-on inside Tanzer after the ship is swallowed during the Rune Quest. He asks the party for aid and the player can decide whether or not to do so (Blue is the only one who automatically refuses to help without even being given a dialog choice). Saying yes has him join the party and he guides the party to the Vitality Rune, where they defeat slimes. If the main character agreed to help Fei-on, he joins the party for good following this, otherwise he remains in Tanzer.

Fei-on appears as an obtainable character. 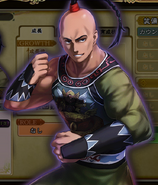 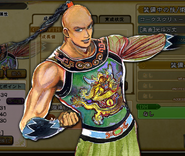 Fei-on appears as an obtainable card.

Retrieved from "https://saga.fandom.com/wiki/Fei-on?oldid=26332"
Community content is available under CC-BY-SA unless otherwise noted.