Flynn (フリン, Furin?) is a non-playable character in SaGa Frontier 2. He is Gustave XIII's only childhood friend as both have no Anima and cannot use spell Arts.

Flynn first meets the young Gustave while living in Gruegel. He patiently puts up with Gustave's temper and self-loathing and always remains at his side. Ever loyal, Flynn accompanies Gustave and Queen Sophie to Jade when they are relocated there.

Always being by Gustave's side means Flynn gets caught up in a lot of trouble and unnecessary circumstances, such as being kidnapped by bandits. Although Flynn has no social status at all, he still accompanies Gustave everywhere, even going so far as to gatecrash a party held by Sir Thomas, where they meet a new friend, Leslie.

At some point in time, Flynn has a son named Dirk with an unknown woman.

It is unclear what happens to Flynn following Gustave's death. He assists Gustave in his conquest of Wide, and is last seen after he and the others find Gustave's sword at the destroyed Southern Fort. From that point on, he is no longer seen in the story.

For the first time ever, Flynn becomes a playable character in Romancing SaGa: Re;univerSe. His weapon class is Short Swords and he currently has three Styles available.

His A Style's Arts list consists of Feint, Shock Rush, and Screwdriver. His artwork header is [Sir Gus, the Sea!], referencing the first time he saw the ocean in SaGa Frontier 2.

His S Style Arts are Quick Thrust, Roundabout, and Mega Thrust. His artwork header is [Let's Eat Some Akebia], referencing his and Gustave's favorite food when they were growing up together.

His SS Style Arts are Cutting Lunge, Sword Ballet, and Cross Cutting Lunge. His artwork header is [Just Don't Fight], referencing the fact that he didn't fight when he accompanied Gustave on their first outing to the Caverns of Jade, cementing his status as an NPC. 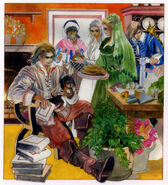