Forneus (フォルネウス, Forneus?) is a character from Romancing SaGa 3. He is an Abyss Lord, with him being the Lord of the Sea. He resides in the underwater palace. He was responsible for taking away Herman`s youth. In his true form Forneus is that of a young green haired kid with a trident. In his fake form he is a giant fish like creature. By the looks of his true form he seems to be the youngest of the 4.

In his first encounter depending on how strong your team is at the time he can be either really hard or really easy. He will use the usual monster claw attacks in his first form and use his move Maelstrom which can be deadly if he uses it multiple times as it does very high damage to all and has a high chance to instantly kill them when fighting him if you wish to avoid his Maelstrom special effects bringing someone like Leonid is good as his Dusk Robe makes him immune to all status problems instant kill included so he will not be affected by it, Equipping Fishscale Armor can negate the instant death effect of Maelstrom, Forneus also like to often use the water magic Squall to attempt to heal as if water is in the air he will recover 999 HP at the end of each round so using different elements is best to stop this. In his true form he is much more powerful and uses many spear techs such as Double Stab and Aiming which can do much damage he also uses his water magic spells still but much stronger and he uses Maelstrom much more often. Fishscale Armor and armors that have a Lightning weakness should not be worn as he will use Mad Thunder in that form. To be sure not to get wiped out Reviver should be used here as well as Shadow Servant to double the damage done techs like Split Body and Golden Dragon work well use of any powerful techs here is best as this will not be easy Leonid again also serves great purpose against his Maelstrom attack. 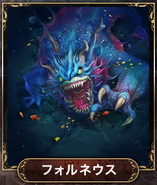