Fuse (ヒューズ, Fuse?) (short for Crazy Fuse (クレイジーヒューズ, Crazy Fuse?)) is a recruitable character from SaGa Frontier. He is a patrolman for IRPO. He excels in hand-to-hand combat and is generally geared towards learning all the martial arts moves in the game.

As befitting his codename, he has a short temper and does handle his anger well. He is talkative and gets bored easily. Although Fuse has training in Zen Buddhism and meditation techniques, he is dismissive and contemptuous of IRPO's mental training.

Fuse personifies the "bad cop" in the classic "good cop, bad cop" duo, with his former partner Ren being the "good cop." Fuse has a great deal of respect for Red as a colleague and an officer. They've also gone drinking together, although Fuse hates it because Ren cries and becomes sentimental when he drinks.

He regularly flirts with female colleagues, even those who openly despise him such as Doll. Fuse also dislikes Silence, both because Silence's mutism drives Fuse crazy and women tend to find Silence more attractive.

Fuse is a career policeman working for IRPO. His real name is Lostar (ロスター, Lostar?), but his boss nicknamed him "Crazy Fuse" for his short temper.

Fuse first met Ren during their academy days. By the time of SaGa Frontier, the two had been friends for over ten years. During that time, Fuse underwent standard IRPO training at their facility in Kyo, including training in meditation and Zen Buddhism.

IRPO assigned Fuse to the Region Patrol, where he worked his way up through the ranks and eventually reached the rank of "Super Elite." Even at that high rank, he clashes with his superiors and regularly complains about his low salary.

With Rabbit as his partner, Fuse worked an investigation of drug trafficking in Kowloon. In the course of this investigation, he briefly encountered Blue, who was looking to return to the Magic Kingdom, but Doll called Fuse into a case in Owmi before Fuse could assist Blue.

In Owmi, Fuse ended up beneath Lord Manor, fighting the DevilSquid alongside Silence. Fuse fainted during the battle, but Silence, who was carrying a PearlHeart accessory that he'd obtained in Manhattan, was able to defeat the DevilSquid and absorb the creature into his MysticGlove.

That night, Fuse went drinking with Ren. That day, Ren had fought with Emelia, and his drunken crying irritated Fuse. Fuse talked Ren into trying on a mask that Ren had with him. Ren did so and started to transform into Joker, but Fuse left without noticing the change.

The next morning, a hungover Fuse had an altercation with Red as Red ran from the scene of Cindy Campbell's building as it was burning. Red almost revealed his alternate identity as Alkaiser, but Hawk was nearby and stopped Red from doing so.

He questions Cindy Campbell along with Red in the C.T.C. Building in Manhattan. He later joins Red briefly when he helps him defeat Nomad and her pirates who hijacked the Cygnus.

Fuse later joins Red in Manhattan by talking to him in mall's cafe, though this is actually optional to do. He can also join the party if Red seeks the Shield Card in the Arcane Quest before talking to him in Manhattan. Interestingly, if Fuse is recruited in Manhattan and the player goes to IRPO to start the Shield Card quest, Fuse will simply hand it to over to Red without ever going to Mosperiburg. While this will allow the player to easily complete one of the Arcane Magic quests, it also means forgoing a chance to obtain the treasures in the dragons' cave as well as recruit Suzaku Jr.

Fuse interrogates Emelia about the murder of her fiancé Ren.

He joins her if she completes the Mosperiburg mission to obtain the Shield Card.

He joins him if he completes the Mosperiburg mission to obtain the Shield Card.

He joins the party if they complete the Mosperiburg mission to obtain the Shield Card.

Fuse appears as an obtainable card.

Card artwork
Add a photo to this gallery 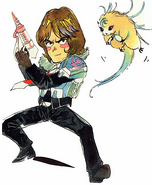 With Cotton
Add a photo to this gallery

Retrieved from "https://saga.fandom.com/wiki/Fuse?oldid=37082"
Community content is available under CC-BY-SA unless otherwise noted.