Game Over is a game mechanic which prevents the player from continuing the game after all party members have lost the will to fight. It is usually featured in the classic Role-playing games in the franchise.

Mainly when all the parties have the status of Knocked Out or Petrify, the battle becomes Lose and the player is returned to the Title Screen. In the case of Romancing SaGa 2, it will not be Game Over except for Final Emperor, and it will choose the next Emperor candidate to inherit. But when the LP of But and Protagonist becomes 0, it may become Game Over. 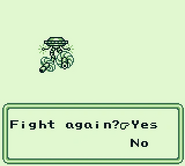 Game Over Saga Frontier
Add a photo to this gallery
Retrieved from "https://saga.fandom.com/wiki/Game_Over?oldid=36730"
Community content is available under CC-BY-SA unless otherwise noted.