Gen (, Gen?) is a character from SaGa Frontier and a swordsman from Wakatu. He lives in the town of Junk. He is one of the more practical characters in terms of personality and while he seems to give off the impression he's just a drunkard looking for his next drink, he has a painful past he keeps to himself. Gen has the distinction of being one of the few characters in the game that every lead hero can recruit.

As is stated in-game by both T260G and the skeleton in Koorong, Gen is a gifted swordsman with incredible talent in sparking sword techniques. He is ultimately the best among male human party members to learn them as often as possible.

Gen is first encountered in a pub in Junk. He later helps T260G rescue Thyme from Mr. Caballero.

When T260G leaves Junk to find its mission, Gen accompanies it.

After T260G destroys RB3, Gen reminds it that T260G has one last mission: to report back to Rosemary and Thyme.

Gen joins Riki when he confronts Caballero in Scrap.

If Gen was recruited through the events of the Arcane Quest, he has extra dialogue when Captain Hamilton reveals that Mondo's base is in Wakatu.

If the other characters started the Arcane Quest, they must talk to the skeleton in Koorong, who tells them to look for Gen in the pub in Scrap. When they talk to him, he agrees to guide them through Wakatu Castle, and joins them.

Since Gen is recruitable in anyone's story, he can also participate in a simple but rewarding sidequest to obtain a powerful weapon known as the Comet Blade. If the player has built Gen's stats accordingly, walking into the Blade Chamber at the end of Wakatu and examining the statue grants the party the Comet Blade. While there is no clear indication what exact values Gen needs to reach to obtain the sword, his HP, WP and STR need to be at high levels to complete this quest.

Gen appeared as an obtainable character.

Gen appears as an obtainable character. 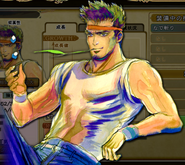 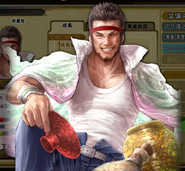 Gen appears as an obtainable character. The regular versions of Gen are obtainable as gacha units from the regular gacha pool.

Gen appears as an obtainable card. 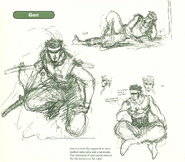