"The second prince of the Varennes Empire, Gerard is more even tempered than both his father Leon and his brother Victor, and makes up for his shortcomings on the field of battle with his insatiable thirst for knowledge. Yet he has no choice but to fight when he succeeds his father and is thrust into a role of responsibility."
—Romancing Saga 2 official website description

Gerard (ジェラール, Jerāru?), also known as Gerard the Kind, is the main protagonist for the second part of the Romancing SaGa 2 game. He is the younger brother of Victor and the son of King Leon, whom the player initially plays. After this, the player picks the successor of his/her choice to be the protagonist for the remainder of the game.

Prior to Leon's death, Gerard wears his tunic, and white pants. However, after the time skip, he gets a cosmetic upgrade and his character will then start wearing gold armor. In addition to this, Gerard's tech spark type also changes.

While Gerad does not speak much, other characters within the game and media allude to the fact that he is more of a scholarly figure than fighter. He prefers to deal with the administrative duties of the kingdom than being on the front lines of combat. His more pacifist nature is a point of contention with the mercenary Hector who refuses to help Gerad until he proves himself capable of defending the kingdom.

Two of the biggest scenarios available within the short time he is playable also showcase Gerad's focus on intelligence over brute force as he can recruit the Thieves guild to overtake the enemy fortress and recruit the Bralwer's by allowing them to save face with the citizen's of Nibel.

In other media, Gerad is shown to be a wise and brave man who believes strongly in the idea of the greater good. Often being rather selfless and doing what he can to help others.

Gerard arrives alongside his father, Leon, at the Sealed Cave. He and his father set out to dispatch monsters inside the cave, clearing it out entirely. They arrive back at Avalon and are greeted by Victor, Gerard's older brother and Leon's first son. Leon leaves Gerard to his own devices as the king meets with a visiting seer.

Gerard appeared as an obtainable character.

Card artwork by Tomomi Kobayashi.
Add a photo to this gallery

Gerard appears as an obtainable character. He is a playable level 3/5 character. His Commander ability in Imperial SaGa ups all Romancing SaGa 2 characters.

Card artwork by Tomomi Kobayashi.
Add a photo to this gallery

Gerard appears as an obtainable character. The regular versions of Gerard are obtainable as gacha units from the regular gacha pool and the S-rank version was previously available as a login bonus.

Banner.
Add a photo to this gallery

Gerard appears as a character. His likeness is portrayed by Yuugo Sato. 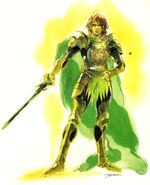 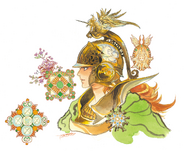 Gerard as seen on the front cover of the box with his helmet.

Retrieved from "https://saga.fandom.com/wiki/Gerard?oldid=36991"
Community content is available under CC-BY-SA unless otherwise noted.