Hawke (ホーク, Hooku?) is one of the 8 main protagonists in Romancing SaGa and its remake Romancing SaGa: Minstrel Song. He was born in the Coral Sea and can be found in Uso.

He is voiced in Japanese by Unshou Ishizuka and in English by Gerald C. Rivers in the remake.

Hawke's clothing is noticeably simpler than the rest of the main cast's outfits, wearing a blue bandanna that covers his long black hair, a small goatee, and a white shirt covered by his distinct blue tunic. He wraps bandages around his forearms and wears a white belt.

Hawke was radically redesigned in Minstrel Song, in which he sports a turquoise striped hat and tunic, brown boots, very long hair, a much longer goatee, and a braided beard.

Hawke is shown to be quite a proud captain. Instead of joining Butcher, Hawke decides to fight against his overwhelming crew. Fittingly, he uses a copious amount pirate lingo in his speech.

Captain Hawke is a famous pirate from the Coral Sea. He and his crew sailed aboard the "Lady Luck". At Pirate Coast, he challenged Butcher, another pirate who would say to settle the fight outside on Mask Isle to resolve a dispute. Upon arriving, It turns out the battle was just a ruse to sell out Hawke's location to the Bafal Empire. Enraged, he returned to Pirate Coast to challenge Butcher, but most of the Pirates sided against Hawke, chasing him away. With nowhere else to go he eventually got caught in a storm and got shipwrecked on Walon Isle.

His ending can be altered depending on if Butcher is defeated during the Pirate Invasion of Melvir and choose to Pursue him. (Only Hawke will be able to do this)

All of Hawke's unique cutscenes.

Note: Recruiting Hawke unlocks Northpoint and Godongo. The easiest way to unlock Uso to reach Hawke is to recruit Gray or Barbara.

Hawke is a rather odd character. He has the high HP and Vitality growth of a physical attacker, mixed in with the Agility and Dexterity growth of a rogue. He also has the ability "Hawke Blade" pre-learned. His LP is extremely high and his Magic is fair.

His high base stats make him the best starting character after Albert. To offset his powerful base stats, Hawke's Willpower and Compassion grow very slowly, making him a useless healer and his defense weak against magic-using enemies. Hawke can fulfill practically any combat role proficiently, but his high Dexterity and Agility make the rogue build the easiest for him to pull off.

Hawke appears as an obtainable character.

Hawke appears as an obtainable character. 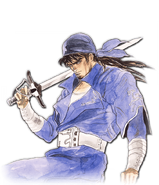 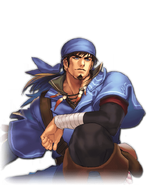 Hawke appears as an obtainable character. The regular versions of Hawke are obtainable as gacha units from the regular gacha pool.

Hawke appears as an obtainable card. 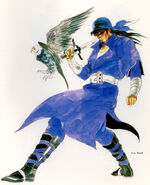