Jamil (ジャミル, Jaamiru?) is one of the 8 main characters in Romancing SaGa and its remake Romancing SaGa: Minstrel Song. He was born in South Estamir and can be found at Altours, Bruelle, Tarmitta and Yeoville.

He was voiced in Japanese by Hiroyuki Yoshino and in English by Ted Sroka.

Jamil has medium sized brown hair covered by a blue cap, he wears an array of blue clothing and he has more cloth wrapped around his calves, torso, and pelvis (?).

In Romancing SaGa: Minstrel Song, Jamil has a radically different design. He now sports dark green hair with most of it escaping his new hat, which looks more like a crown than a regular civilian's cap. The rest of his clothing is way more simple than the original, spirting a long sleeved shirt with the sleeves themselves being tied up, a long cloak with wavy designs, long purple pants, socks and shoes.

Jamil is shown to be an excelent thief, although held back by his best friend Dowd. He is shown to be quite loyal to his friends, he is very quick on the decision of saving Farah, no matter the questionable actions he has to take part in. Later on in the game, after some unfortunate events that take place in the Assasin's Guild quest, Jamil exclaims revenge for what they did to his partner.

If you let Wuhan live after the Wuhan's Secret quest, he will ask you to save his daughter from the Water Dragon. In that particular scenario, Jamil is shown to be extremely cocky, asking to be paid in advance, mostly due to his grudge against Lord Wuhan for the previously mentioned events.

He is also described to be a rather carefree and laid back type of person, as Sif exclaims that "everyday is a party" for Jamil.

Jamil, a young man living in South Estamir, goes through his life stealing things from unsuspecting city folk and sharing the wealth with his friends Dowd and Farah.

After Farah's mother sends Jamil out to rescue her from a loan shark, the thief realizes he must dress up as a woman to gain access to where Farah is being held.

Note: Recruiting Jamil unlocks South Estamir and North Estamir. The easiest way to recruit Jamil would be to first recruit Barbara, as she does unlock Tarmitta, which is one of the harder places to unlock.

Jamil starts out arguably the best-armed, with a very powerful Foil as well as an accessory that increases the rate at which Jamil can deflect attacks.

Jamil's high Agility and Dexterity growth make him a nimble sprite that becomes quite deadly with a Foil or Bow in his hands. His Magic is also fair.

Conversely, he has VERY low Endurance, Willpower, and HP; making him unable to withstand a lot of punishment from both weapons and Magic attacks. He also has low Compassion, making him a rather weak healer.

It's best to play Jamil to his strengths; as they are all he's really got.

Jamil appears as an obtainable card.

Jamil appears as an obtainable character. 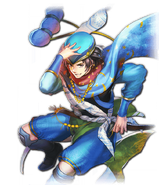 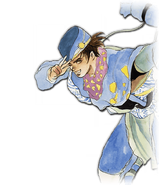 Jamil appears as an obtainable character. The regular versions of Jamil are obtainable as gacha units from the regular gacha pool.

A-rarity - [Thief Swift as the Wind].

Jamil appears as an obtainable card.

Jamil appears as an obtainable character as part of a crossover promotion with Emperors SaGa. His appearance is based on his original design. His attribute is Dark and his leader skill is Rapid Stream (ラピッドストリーム, Rapid Stream?). His Brave Bursts are Waltz sword (円舞剣, Waltz sword?) and Samsung collision (三星衝, Samsung collision?).[1][2] 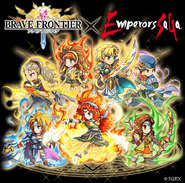 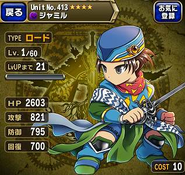 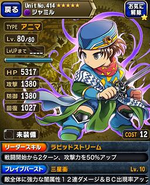