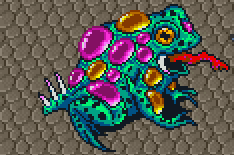 In the original SNES game, the Jewel Beast wasn't set out to be an incredibly hard opponent, but in the remake he's one of the 4 strongest enemies in the game and he's the only one not to be part of the Three Evil Gods.

The Jewel Beast is one of Saruin's creations; Saruin himself created a set of Fatestones and implanted them into a monster, it caused the monster to go mad. Not being able to obey Saruin, the monster was put into a state of deep sleep in the Frontier region.

He is completely resistant to all magic used against him, Has one offensive spell from each magic type (3 Cosmology spells: Sunray, Starbeam and Cosmic Tide) except Sorcery and Necromancy and his "Jewel Blaster" technique deals INT based damage with 4 element attributes (Fire, Cold, Electricity, and Energy). His "Multiplex Eye" will inflict allies with paralysis.

He will rarely, if at all, use Jewel Blaster when fought in his lair, so most players try to delay him from waking until they can meet and fight him. To do so, specific fixed encounters during Frontier quests must be cleared, and his awakening can be delayed further by destroying the pillars in his lair (Destroying all 5 allows you to delay his awakening to the 19th Event Rank). If he does wake up, he will rampage across the Frontier and lay waste to all the towns each ER until he reachs Weston. If one wishes to open his lair and be able to fight him, clear the Assassins' Guild or "Aquatic Ecology" quest by the 13th Event Rank.

The Jewel Beast is very reminiscient of the Tarrasque from Dungeons&Dragons, as the Jewel Beast itself is also a nearly indestructable and unstoppable force, which destroys everything in its path. 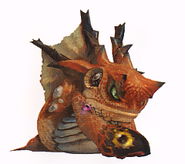