King Sei (, King Sei?) is a playable character from SaGa Frontier. He was a king who ruled the region that includes Shrike. He was buried in Sei's Tomb with the Fighter Ring. Despite his appearance and the intimidating way he addresses the party for breaking into the tomb and collecting the three treasures to awaken him, he is a kind soul who continuously watches over Shrike and wants to protect it from those who would do it harm.

Children at the playground in Shrike lead Riki to Sei's Tomb. Riki gathers the Magatama, Murakumo Sword, and Mizukagami Shield and places them on pedestals. When he goes to the coffin, it opens and Sei awakens in his undead form. The rings communicate, and Sei gives Riki the Fighter Ring and joins the party.

The other characters must place the Magatama, Murakamo Sword, and Mizukagami Shield on the pedestal to access Sei's chamber. Once they awaken Sei, they must fight him and some Dead Knights. Once they win, Sei offers the Kusanagi sword or joins the party. 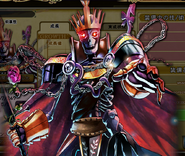 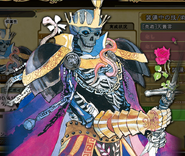 Retrieved from "https://saga.fandom.com/wiki/King_Sei?oldid=26337"
Community content is available under CC-BY-SA unless otherwise noted.