The first time the players will face off against him as Emperor Leon in a two stage battle, and gives his life as a gambit to learn the secret of Kzinssie's ultimate technique: the Soul Steal. He then passes this knowledge onto his surviving son Gerard through the ritual of succession, and endows the players with the Soul Steal evasion tech.

The second time is when the player returns as Gerard. This is the first time the players will defeat one of the Seven Heroes.

In this encounter, the players will deplete his 999 hp, and then prompting him to use the Soul Steal on Leon, ending the encounter.

The second encounter Kzinssie will have slightly more upgraded stats and a couple more techs under his belt. He will go through a similar script as the first encounter, and when he depletes his 999 hp, he will activate the Soul Steal in an attempt to end the encounter as he did last time. If the player still has the Soul Steal evade from earlier, this will not work. At this point, you will fight Kzinssie in his 3rd form.

Kzinssie appeared as an obtainable character.

Kzinssie appears as an obtainable character.

Aaargh!! So cool, but so horrible, Kzinssie is tied with Nusakan as the worst shadow caster types. He is the only caster type that uses Big Swords, like Rocbouquet uses Axes and Martial Arts. If Rocbouquet hasn't Wind magic wi her, she would be the worst, as her status are worse than Kzinssie's, but as Kzinssie can only use Shadow Magic...meh.

Kzinssie appears as an obtainable card.

Kzinssie appears as an enemy boss. 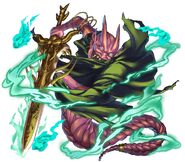 Kzinssie and the rest of the Seven Heroes appeared as summonable units in Lord of Vermilion (ロード・オブ・ヴァーミリオン Rōdo obu Vāmirion), an arcade-based trading card game series developed by Think Garage and distributed by Square Enix. Physical collectable trading cards enabled players to summon and control characters in the game via interactive play surface. For the SaGa series characters, these cards included short narratives and other trivia, providing fans with an insight into a character's personality and background where it may have otherwise been absent in the original games. 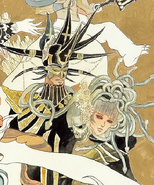 Kzinssie as depicted in the Romancing SaGa 2 manga

Kzinssie as depicted in the Romancing SaGa 2 manga 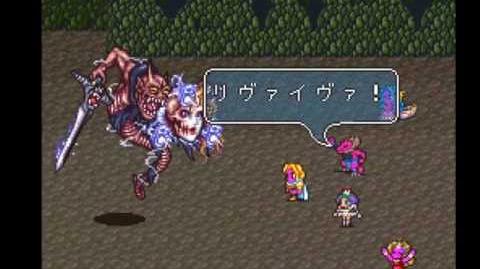 Romancing Saga 2 Kujinshi Reborn!
An example of a battle with Kzinssie in his second form. 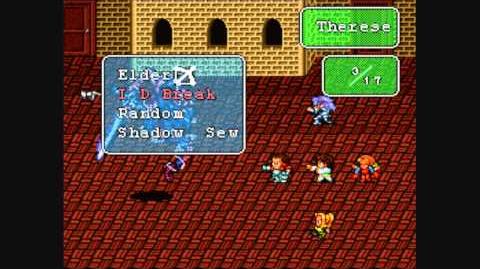 Romancing SaGa 2 - First Kujinshi Battle
An example of a battle with Kzinssie in his first form.