"Once known as a member of the notorious pirate team "Sea Wolf", she retired when she married Pablo, a school teacher. Fierce at times, but has a romantic side as well. One day while travelling, she receives the news of her husband's death. A fateful meeting awaits her at Pablo's funeral."
—Description

Laura (ローラ, Rōra?) is one of the main protagonists of Unlimited Saga. However, she is considered the main character of the game by many people, especially as her story follows a more traditional RPG approach. She joins your party on her route and Mythe's route.

She is voiced in Japanese by Inoue Kikuko and in English by Kelli Cousins.

-Who are the chasers?

Laura was once leader of a notorious gang of pirates known as "Sea-Wolf," but gave up her life of piracy when she fell in love with an primary school teacher named Pablo in Nivacolina. While they were still young, Laura received news of Pablo's assumed death during travels, and his only remains were a pair of cracked glasses which Laura kept.

The game begins with Laura attending Pablo's funeral service. While mourning, a fair youth named Henri runs into her while escaping from a gang of bandits, who, unknown to Laura or Henri, were chasing the boy to steal the Blade of Escata from him by order of Basil Galeos. Laura defends the boy from harm and accompanies him to the local inn.

In Snowman's Hat Inn, Henri reveals to Laura that he is the prince of the fallen kingdom of Escata, destroyed recently by Dagul Bos leaving Henri orphaned. She suggests that he changes his style and finds new clothing for him and cuts his hair to help prevent him from being recognized as Prince Henri.

When Laura asks Henri if he has a place to go, he says he remembers visiting the Festival of Regina Leone in Vaftom when he was younger. Laura, now alone after the death of her husband, decides to escort the boy to Vaftom, claiming her hometown of Gadeira is on the way and she can stop for a visit.

As the two stop in Wanda, they meet Judy who is searching for her mother. Henri invites Judy to accompany them. After Judy compares Laura to her mother, Laura complains to herself that she has become a babysitter for children now that Henri and Judy are both under her care. On the road to Longshank, where they will be able to board a ship to Vaftom, Laura continues to protect Henri from the bandits that are constantly attacking him.

In Longshank, Laura meets a young woman named Michelle who is complaining of being cursed. When Laura and Henri board the ship to Vaftom, they encounter Michelle again as they hear a scream from another part of the boat. Michelle claims that something terrible must be happening on the boat because she is there, again complaining that her existence is bad luck. Laura tells Michelle that people can create their own destiny, and encourages Michelle to help with the problems on the boat instead of complaining about them. Together, Laura, Henri, Michelle, and Judy deal with the ghosts haunting the boat and fend off a group of bandits who are still after Henri.

Laura arrives in Vaftom in time for the Festival of Regina Leone, which she attends and enjoys with Henri. During the lighting of the memorial fires on the third night of the festival, Laura is seen crying while mourning Pablo. Henri notes that this is the first and last time he would ever see Laura cry.

After the festival concludes, Henri explains to Laura that the mausoleum in Vaftom was built in honor to Iskandar by a former king of Escata, so it may hold some information about the kingdom and why it was attacked. Laura accompanies Henri to the mausoleum where they learn that the blade that Henri is carrying holds a mysterious power when it opens a secret chamber in the mausoleum. Laura suggests that if Henri were to learn the secrets of the blade, he may uncover the mystery of the fall of Escata.

As they exit the mausoleum, Basil Galeos, a long-time acquaintance of the royal family of Escata, appears and offers his protection to Henri. Laura leaves Henri in Galeos's care.

Shortly thereafter, when Laura is drinking at a pub and feeling lost, Henri appears again with his bodyguard Francis, preferring to be escorted by Laura instead of Galeos. Laura agrees to continue to accompany Henri. They leave for the fallen kingdom of Escata to try to learn more about the blade.

On the way to Escata, Laura discovers Francis writing a letter to Galeos. Because she does not yet trust Galeos nor Francis, Laura accuses him of being a spy and starts a fight with him. After calming down, Laura realizes that her rash reaction must have been caused by the fact that she cares much more deeply for Henri than she had realized.

Laura escorts Henri in his quest to seek the Elemental Gears using clues they found in the books in the palace. They visit Galeos in his home to acquire the Crown of Ares. They receive the other four elemental gears by completing challenges to prove their worth to guardians of the gears. In turn, four assistants (Anzan of the Petran Tribe, Armic of the Chapa Tribe, Platyphyllum of the Lilean Tribe, and Musol Yanii of the Anubito Tribe) join Henri in his quest after he recovers the gears with their help.

During their quest to retrieve the Gloves of Venus, the Elemental Gear of Metal, from the Anubito Tribe, Laura and Henri discover that the gloves were stolen by Dagul Bos. Henri decides to use the quest for the gears as a chance to seek revenge against Dagul Bos for the murder of his family and destruction of his kingdom.

Since Henri has concluded that Dagul Bos is after the Blade of Escata, he does not want to take the blade to Dagul Bos's castle in fear of it being stolen. Francis suggests that they leave the blade and the gears in the trust of Basil Galeos. Laura objects to the idea, still not trusting Francis or Galeos. Henri agrees with Francis and the group leaves the blade with Galeos anyway.

Laura accompanies Henri to Dagul Bos's castle, but when they find Dagul Bos, she leaves Henri to fight him alone because the revenge is something she feels he must do for himself. The success of Henri's battle can change the story, so there are two possible outcomes.

If the player wins in the fight against Dagul Bos, Henri finds his revenge and retrieves the Gloves of Venus. Upon returning to Basil Galeos, Galeos steals the Gloves of Venus from Henri and reveals that he was using Henri's hatred for Dagul Bos and his trust of the house of Galeos to manipulate him into collecting the blade and gears so he could gain the power of the Blade of Escata for himself. Galeos then makes off for Nakle Lines, where the power of the blade can be unleashed.

Laura accuses Francis of working with Galeos to manipulate Henri once again, but Francis declares to have had no knowledge of the plan that Basil Galeos and Dagul Bos were scheming and stays loyal to Henri, continuing to travel with Laura.

Regardless of who ends up with the blade due to the player's outcome in the previous battle, Laura escorts Henri to Nakle Lines, one of The Seven Wonders. Henri questions Laura's reason for accompanying him for so long. Laura claims she feels a connection to Henri because they both lost someone important recently, and it must have been Pablo that brought the two together. Because of this, she feels an obligation to see Henri's story to its end.

Upon reaching the end of the Nakle Lines, Laura discovers that their arrival was another part of the villains' scheme. Since the final key to unleashing the power of the Blade of Escata is a member of the royal bloodline, Basil Galeos or Dagul Bos is able to release the power because Laura brought Henri through Nakle Lines.

After the defeat of Chaos, Henri assumes position of King of Escata. Laura decides that she will part with Henri, realizing that they have both grown and accomplished their goal from being together. Filled with resolve, Laura parts ways with Henri and returns to Nivacolina. Because of her journeys with Henri, she is able to move on from mourning. She reopens the schoolhouse in Pablo's name, starting her new career as a teacher.

In Mythe's scenario, Laura appears as a customer at Mythe's Workshop asking about the Blade of Escata whilst alerting Mythe to the fire at Fugar's Mansion. Mythe rushes out promptly, leaving Laura at the workshop. It is assumed she joins after the fire, for reasons unknown.

For all the spoken lines from the storyline scenes, go here:

Laura is a balanced physical character with high Strength and Spirit, which gives her great defense against magic-using enemies. She also has Fire spells pre-learned, giving her an edge in battle. Her Fire growth is high, but aside from that aspect, she isn't really built for Magic. Despite her Dagger Arts, she is weak with Skill, making her better with Strength-alligned weapons and fighting styles.

When playing as Laura, you can recruit the following chactaters:

For all the lines to listen to, go here: http://www.youtube.com/watch?v=o1fWxpBZyaU

Laura appeared as an obtainable character.

Laura appears as an obtainable character. 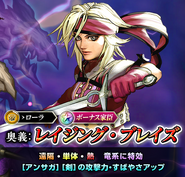 Laura appears as an obtainable character.

Laura appears as an obtainable card. 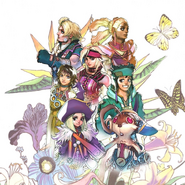 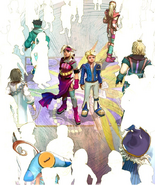 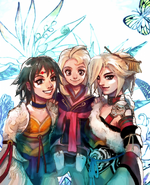 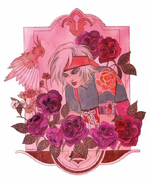 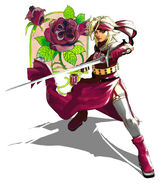 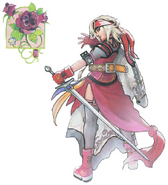 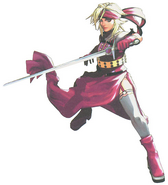