"Leaders of the Varennes Empire have long been known for their ambition, but none surpass that of Emperor Leon. His leadership and vision united the land in an effort to restore peace to Varennes, but he fell in battle against Kzinssie, one of the seven heroes, in the Varennesian capital of Avalon."
—Romancing Saga 2 official website description

Leon (レオン, Reon?) is the first of the three player characters in the game Romancing SaGa 2. He is a king. After his death, his stats and abilities transfer to his son Gerard.

Leon starts with the tech double cut. This actually prevents the players from sparking the tech later to add to the dojo. In order for players to spark the double cut tech, the players need to actually manually delete the tech from Leon's (or a future Emperor's) tech list before it can be re-sparked and added back in.

Leon has long red hair and a bearded mustache. He wears refined robes underneath his armor and a red robe.

A wise and benevolent ruler, Leon does what is needed to save innocents. He is shown to have a thirst for vengeance following the death of his son at the hands of Kzinssie.

In the year 1000, Leon is aided by Therese, Bear, James and his second son Gerard in vanquishing monsters inside the Sealed Cave. Leon teaches Gerard the basics of combat while eliminating the monsters in the cave. After returning from the Sealed Cave, the group returns to Avalon and are greeted by Leon's first son, Victor.

Leon retires to his throne room while a seer makes her way to him for an audience. The two discuss for a long time about a perilous matter until Leon decides to take Gerard on another excursion.

Arriving at the Watchman Nest with Gerard, the two swiftly expel the monsters in the area and return to Avalon. Upon their return, Leon and Gerard are greeted by the corpses of their soldiers and by a dying Victor. Before his death, Victor tells them of his battle with Kzinssie, one who claims to be one of the Seven Heroes.

Leon decides to get his revenge on the Seven Heroes, summoning the seer to disclose how to defeat Kzinssie. Leon takes Gerard with him as they attempt to reach Kzinssie at his base in Somon.

When they encounter Kzinssie, the latter decides to cast Soulsteal on Leon, leaving Leon in a deathly state. On his deathbed, Leon tells Gerard of the magic of inheritance he had discussed with the seer. In allowing himself to be hit with Soulsteal, Leon deduced how to combat the ability and proposes to Gerard that the power of inheritance will help him learn it too. As Leon perishes, Gerard weeps by his bedside, inheriting Leon's abilities and knowledge and ultimately assuming his role as the next Emperor.

Leon appeared as an obtainable character.

Leon appears as an obtainable character.

Leon appears as an obtainable character. The regular versions of Leon are obtainable as gacha units from the regular gacha pool. The A-rank version of Leon was available at an increased rate during the Kzinssie Recruit event.

Leon appears as a character. His likeness is portrayed by Katsutoshi Uchibori.

Emperor Leon as depicted in the Romancing SaGa 2 manga. 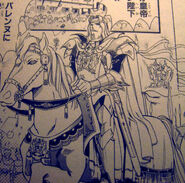 Emperor Leon riding his horse in the Romancing SaGa 2 manga. 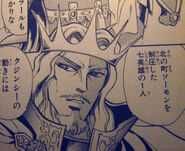 A close up of Emperor Leon in the Romancing SaGa 2 manga.