Leonard (レオナルド, Reonarudo?), also known as Leo (レオ, Reo?), is one of the main protagonists in SaGa Scarlet Grace. Separated a far way away from the heart of the empire, Leonard is a farmer from the remote region of Yaksalt. His grandfather died, so from this year onward he must farm by himself.[1]

Leonard has large blonde hair, with a spiky bunch to his right side. He wears a black shirt, a utility belt, beige pants with black markings, and black shoes with yellow buckles.

"Your typical tough guy, Leonard is a man who prefects action to words. Those not put off by his harsh demeanor find themselves with a staunch ally through thick and thin."
—In-game description

A bad boy who prefers to act before talking, he and his troublemaker friend have caused mischief in the past. He was a dangerous boy who avoided even adults, but a few years back suddenly returned to work on his grandfather’s farm.

He has recently started saying, “I must not become an irresponsible adult.”[1]

"After Leonard helped a dying woman who collapsed on the farm, his fate significantly changes. In a delirium, she kept muttering “Go to Ei-Hanum.” It is the name of a legendary capital in a fairy tale. Upon hearing that, he sold his grandfather’s farm and went in search of the legendary capital Ei-Hanum in her place. His friends would not let him go alone with such an honest resolve."
—Website Description[1]

Upon traversing the Secret Passage towards Marchiam Megdasse, Leonard's Scarlet Shard starts to glimmer. Upon using the shard, a shooting star falls on the northeastern part of the province. Leonard and Elisabeth exclaim disbelief at what just happened, with Elisabeth stating that it looked like a shooting star had fallen to the earth. Leonard wonders about where they are, with Elisabeth mentioning they're in Marchiam Megdasse, the province next door to Yaxart. Leonard tells her that he's never been outside of Yaxart before, much to Elisabeth's shock.

After arriving at the Northeastern Boundary, Leonard and Elisabeth approach Spirit Lake and throw in a scarlet shard. A figment of Leonard appears before them, insinuating that the Spirit Lake isn't Ei-Hanum and that Ei-Hanum is actually at the center of the world, under Azhuacan. After the other Leonard vanishes, Elisabeth and Leonard decide to look for Ei-Hanum in Azhuacan.

Base stats may changed based on choices made during the beginning quiz.

Leonard appears as an obtainable character. 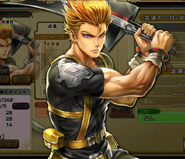 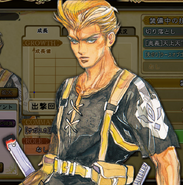 Leonard appears on a banner. 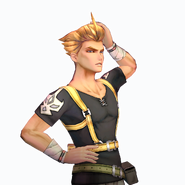 Leonard's sprite from the Playstation and steam achievements.