Liza (ライザ, Raiza?) is a playable character from SaGa Frontier. She is a human female who works at Roufas's Restaurant in Koorong and is an agent of Gradius. Liza is at the top when it comes to learning Martial Arts techniques among the cast of female humans and sparks them easily. Among the male humans, Fei-on is her equal when it comes to the Martial Arts learning rate. Strangely enough, despite Annie being the resident blade user of Gradius, Liza actually sparks most Sword techniques more easily than her friend, according to her internal learning rate data.

Liza and Annie help Emelia escape Despair. She helps her on missions to confront Joker.

Liza offers to accompany Red to Shuzer's Base after he has dinner with Annie.

If Blue recruited Roufas in Shrike during the Rune Quest, Liza offers to escort Blue to the entrance of the Natural Cave which contains the Hide Rune.

Liza refers Riki to Annie when she overhears that Riki needs to sneak into Despair. She does not join Riki.

If Lute recruited Roufas, Liza is in the restaurant. She does not join Lute.

Liza appeared as an obtainable character.

Liza appears as an obtainable character. 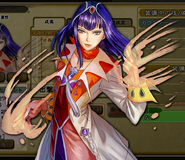 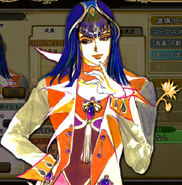 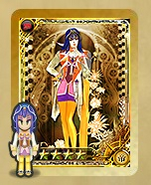 Banner featuring Roufas and Annie.
Add a photo to this gallery

Liza appears as an obtainable character. The regular versions of Liza are obtainable as gacha units from the regular gacha pool. The S-rank version of Liza was available at an increased rate during the Vampire Lady event.

S-rank artwork.
Add a photo to this gallery

Liza appears as an obtainable card.

Artwork featuring Emelia and Annie.
Add a photo to this gallery

Retrieved from "https://saga.fandom.com/wiki/Liza_(SaGa_Frontier)?oldid=27703"
Community content is available under CC-BY-SA unless otherwise noted.