Macha (ヴァッハ神, Vahha Shin?) is a Celestial of those who practice magic in SaGa Scarlet Grace. She is the Celestial of sorcery. She serves as an optional bonus boss in the game.

A goddess who manages "magic", which is a technology to manipulate magic. The stars at the ends of the hair, both legs, and the head represent five lines in sorcery. It is revered by those who pursue magic and is believed as a guardian god in the Genus Gwynez family.

She is in conflict with Maligan. However, it's been said that they were previously in the form of one god.

Macha appeared as a summonable unit named Goddess of Magic, Macha (魔術の女神ヴァッハ神, Majutsu no Megami Shin?) in Lord of Vermilion 4. 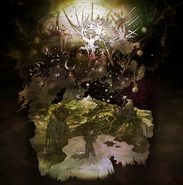 Artwork of the Twelve Star Gods by Kuramochi (倉持論).

Artwork of the Twelve Star Gods by Tomomi Kobayashi.

Screenshot of The Teach na Macha, a building named after Macha.