Maligan (マリガン神, Marigan Shin?) is the god of those who seek the techniques of weapons from SaGa Scarlet Grace. He is an optional bonus boss in the game.

The God who is also said to be the head of the twelve-star God, as he has always fought in battle in the battle with Fire Blinger several times.

He is a god of war, and he freely produces various weapons and delivers all his skills. It gathers the faith of those who pursue martial arts, and it is believed as a guardian deity in the General Swordsman Julanius family.

An illustration of Marigan by Tomomi Kobayashi. 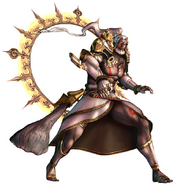 Screenshot of Marigan's temple within the game.