The Matriarch (聖王, Seiō?), also known as Aurelius (, Aurelius?), is a character from Romancing SaGa 3. She is a legend who is mentioned frequently in passing.

The Matriarch's "successor" is said to be the Young Boy.

Prior to the events of the story, the Matriarch had survived the second coming of the Morastrum, ultimately ushering in a new age of peace. She sealed the 4 Abyss Gates with the help of Ferdinand, Paulus and Vassault. Following these events, she resided in Justerm and had a family.

The Matriarch was assisted in her endeavors by the ancestors of Fullbright XXIII.

At an undisclosed time prior to sealing the Abyss Gates, the Matriarch was in Pidona looking for a suitable weapon. The master of a workshop in Pidona assisted the Matriarch in reforging Alloce's demonic spear into the Matriarch's spear. The spear became the workshop's masterpiece and trademark, eventually being displayed in the workshop after the Matriarch had closed all of the Abyss Gates. However, the was stolen in the midst of the turmoil between Ludwig and Clemens. Nora's father had gone looking for it but soon after his body was found floating in the harbor.

The Matriarch appeared as an obtainable character.

The Matriarch appeared as an obtainable character. 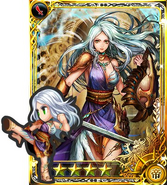