Mei-Ling (メイレン, Mei-Ling?) is a character from SaGa Frontier.

Mei-ling is a young woman with long black hair tied into a ponytail. She has red flowers attached to her hair. She wears a red cheongsam accentuated with a yellow flower design and a long slit on the side. She wears a bracelet and anklet with a cross on her left hand. She wears red shoes.

Her sprite shows her with long violet hair tied into a ponytail. She wears a red and sleeveless cheongsam.

She meets Riki after he arrives in Scrap, and helps him obtain the rings. After all of the rings are gathered, she and the party go to Margmel. When Margmel's residents disappear from Riki's wish, Mei-Ling reveals the true nature of the rings, and that she has the black ring. She transforms into the Master Ring, and is defeated. After her defeat, she returns to normal.

Mei-Ling automatically joins T260G prior to its confrontation with Mr. Caballero in Scrap.

She will join Blue, Lute, and Emelia. She does not join Red or Asellus.

Mei-ling appears as an obtainable character. 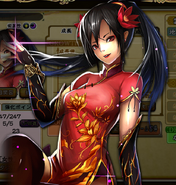 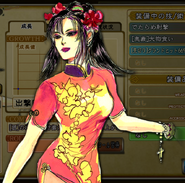 Mei-ling appears as an obtainable card.

Retrieved from "https://saga.fandom.com/wiki/Mei-ling?oldid=26326"
Community content is available under CC-BY-SA unless otherwise noted.