Mirsa (ミルザ, Miruza?) is a character from Romancing SaGa and Romancing Saga: Minstrel Song. He's the legendary hero whom Elore gave the Fatestones and who gave his life in battle against Saruin. He however later became a God himself. Mirsa was highly admired by Aldora.

Mirsa wears silver armor and leggings, though he wears no helmet, showing off his long, white hair. His sprite in the intro, he wears a red cloak. His artwork shows him wielding the obsidian sword.

Nothing is known about Mirsa besides his heroic deeds against Saruin and the fact he became a God.

Mirsa was a young man born of a common origin. He was well-liked by his community and befriended many people, including the sorceress Aldora. He went on to become chosen by Elore to fight against Saruin and his minions. Together with his friends, he made a perilous trek towards Saruin. Realizing his crucial role in eliminating the menace, he could not help but lose some of his friends on the journey.

After finally meeting in Saruin, he engaged in battle and was the victor. However, the battle's effect took its toll on him and he shortly passed away right after sealing Saruin. He was then revived by Elore who had made him into a God. It is presumed from Aldora's ending that it is he who beckoned her soul out of purgatory.

Mirsa appeared as an obtainable character.

Mirsa appears as an enemy boss. 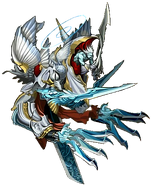 Artwork for Emperors SaGa by nitamame.