Monsters are one of the many races of beings that exist with the various worlds of the SaGa franchise. Unlike the generally humanoid races like Espers and Humans, monsters take on various drastically different appearances, such as quadruped beasts, humanoids, zombies, ghosts, fish, and a lot more. Monsters can either eat the meat of fallen monsters or absorb their power to turn into other kinds of monsters, and by doing so they change their appearance, strengths, and abilities. This ability is generally only used by playable monster characters in the series.

While monsters are often an antagonistic race, they are not unintelligent feral creatures. There are several entries that show that monsters can master communication with other races, and easily integrate themselves into the societies of other species peacefully. In these entries, they are shown in the same towns and cities as the other races, and are able to be understood by the player's characters.

Monsters are a race the player can choose to be in most early games in the franchise history, as early as the first game, Makai Toushi SaGa, but playable monster characters became rare as the franchise became more narratively driven in later games. There are still some prominent friendly monster characters who are playable in later installments, such as Riki and Slime from SaGa Frontier.

Monsters are a distinct race of creatures, created by the Creator. According to the US The Final Fantasy Legend manual, some monsters are from the Continent's past, and some are friendly newcomers from the Tower.

Monsters are one of the three races a player can choose to make their player avatar into, and hire into their party. While monsters have no gender option to choose, the player has the option of choosing between four different types of monsters when starting the game: Clipper, Wererat, Redbull, and Zombie. Like the other two races, monsters do not grow stronger through conventional experience mechanics, however unlike the other races, monsters will transform into stronger monsters by consuming "Monster Meat" from fallen enemies.

The skills of monsters are entirely determined by their current species and cannot be changed except by transforming into a different monster. However, when sleeping at an inn, all skill charges are restored for all skills the monster currently has. Monsters can have up to eight skills, though only the absolute highest level species have eight skills. Monsters cannot equip items at all.

The mechanics for determining what the monster will change into can be a bit complicated. All non-boss monsters found in the game are divided into classes of their type based on their sprite model for the maps. There are 26 classes of monsters with five monsters per class. These monsters are then graded between 1-14, with 1 being weak and 14 being the strongest. The monster class will be determined by the classes of the monster the player is transforming and the class of the monster meat being consumed.

The specific type of monster within that class will be determined by the highest level grade between the two.

Basically Ghoul is the highest level here and when consulting the class chart, the result would be a Lizard monster. Gecko is ranked as Level 3, so the result will be a Gecko. If the player tries to consume monster meat of the same class as the monster, nothing will happen.

In the event that there is no monster within the class that is the same level as the highest level grade of the ingredients, the game can potentially bumps the monster up to the next level within this class.

Wight is Level 12, but the Lizard Chart has no corresponding monster of that level, the game checks to see if there is a monster listed one grade higher, where it will find Salamand. Thus the result will be a grade higher than either ingredient.

If there is no monster listed one level higher than the highest ingredient within the class, the game will then check one level grade below the highest and further until it finds a match.

This is because there is no Lizard monster that is Lv. 4 or 5. The next Lv. Grade is 11, which is too far away from the parameters to be created, so instead it checks down the list and finds Gecko at Grade Lv. 3.

Due to the mechanics of transformation and every monster class having two variants ranked Level 13 and 14 respectively, it is not possible to transform a monster to a lower level if they've reached level 13 or 14 (equivalent to class 5 and class 6 respectively). It should be noted that the Meat of the Four Gods dropped in their second encounters are all Lv. 14 Meat, giving the player a chance to gain up to four level 14 monsters in the endgame, which is barely enough to fully upgrade a full party of monsters.

The name of "Redbull" is censored and changed to "Redhorn" in the English version of Collection of SaGa: Final Fantasy Legend, likely due to a trademark conflict with the Red Bull carbonated drink of the same name.

Monster classes have been expanded up to 36 separate families with five monsters per family allowing for 180 different possible monsters. Level Grade has been simplified to five grades, but every class has several numerical value attached to them. Monsters have a hidden level that ranges anywhere from 1 to 15 and is based on both their family, and what level tier they are. Families are also divided into three groups which serve as an additional modifier. Monster Meat has a modifier that is added or subtracted to the current monsters Family rank (0-35), the resulting value is then modified based on which grouping the two monsters (party member and meat) are from. This will potentially modify the integer by 1 either positively, negatively, or not at all. This final number will determine the new Monster Family at which point the game checks both of the original monsters for their hidden level. Whichever is higher will be the number used against the hidden level of the new monster family's classes. If that number were 3 for instance and the result monster family had a hidden value of 1 (Class 1) 2 (Class 2) 4 (Class 3) 6 (Class 4) and 7 (Class 5) the original number is greater than the first two classes but lower than the third one, at which point you would get the monster from the second class. If the Monster Family had a Class with the exact number, then that will be the result, otherwise, it will always be the highest number beneath the result number.

There are four special meats that have radically different modifiers and are always in one grouping. These monsters represent families that monsters can't change into, but still gain meat from them. The main ones to look out for are Fenrir and TianLung as these are the only two meats capable of bumping a monster into the Level 5 Tier of monsters. Like the previous game, once a monster achieves Class 4 or 5, they can never be dropped into a lower level tier since the Hidden Level for the Class 4 and 5 are the same.

An additional sixth class of monster can be found for the Demon, Slime, and Dragon groups of monsters not found in the original SaGa 2 game. In addition, the way a monster character speaks is determined by the current monster they are. In the unofficial Crimson Nocturnal English translation, this is represented by groups such as dragons and demons speaking in caveman-like broken English, while the slime group speaks in more proper English.

Sometimes, unlike the original game, variant monsters can be found for each class which are more powerful than their basic class. In addition, sometimes when transforming into a monster, a monster may keep one of their techniques they had as the previous monster, a feature not found in the original game.

In this game, a dictionary can be found which lists what meat and monster combo is required to turn into a monster of a certain type. It also lists the abilities and stats of each monster in the game. After turning into a monster, when meat is dropped, pressing the Select button when a character is selected will confirm that the meat will transform the character into that monster.

While SaGa 3 largely dropped the class/race mechanics, it expanded it by allowing any of the four default characters to transform into a monster by consuming meat. Unlike previous installments, the game also allows the player to revert their character back to their non-monster form using a device called the Flushex, which is obtained through the course of the journey and installed in the Talon. It is also possible to switch back by installing robot parts on a monster.

The algorithms for transformations are far more simplistic in this version. All four of the main characters have one of the four elements (Air, Fire, Water, and Earth) attributed to them. Monsters are now divided into four classes based on one of these elements. There are sixteen monsters per element which are determined by a level ranges. When one of the characters eats a monster meat, the game checks the elements of both ingredients to determine which Element Class to choose from. If the elements of both ingredients is the same, the element will not change. The game then checks the player characters level and cross-references it with any available level range within the Element Class to give the player the final result.

New to the series are transitional forms. When a human/esper consumes monster meat, they do not immediately become a monster, instead they transform into a transitory Beast form. Beast use the same algorithm formula as monster listed above. Once a beast eats another monster meat, the result will be a full monster. Once a monster, the player can transform into the other monster types easily like before and will grow stronger with their level.

Monsters gain no bonuses for weapons or magic like Espers or Humans do. Monsters can use abilities/talents and they come with higher base stats than most of the other classes. Monsters can now equip spells and use them, and while they can equip armor and weapons, these do not affect the monsters stats making it pointless to do so.

Riki is a main playable character in SaGa Frontier, who is of the Lummox race of monsters. Other monster characters such as Slime join the party as well.

Similar to the Game Boy trilogy of games, monsters in SaGa Frontier change into other monsters, though instead of eating monster meat, they simply absorb the abilities of other monsters to transform. Unlike prior games, monsters can gain special abilities that are not related to the inherent abilities of the monster they are. They can equip accessories but not other items, and generally cannot use weapons. Playable monsters cannot use magic at all, despite enemy monsters being described as able to possess "Evil Magic" in the game manual.

In Riki's questline, the monsters at Margmel speak that monsters change forms similarly to how humans change their clothes. 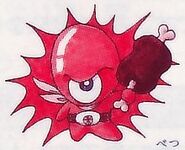 Artwork of a Slime holding Monster Meat in the Japanese manual of Makai Toushi SaGa.

Artwork of a Clipper in the Japanese manual of Makai Toushi SaGa.

Artwork of a Wererat in the Japanese manual of Makai Toushi SaGa.

Artwork of a Zombie in the Japanese manual of Makai Toushi SaGa. 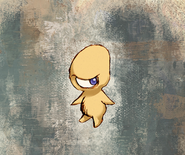 Artwork of a slime.
Add a photo to this gallery 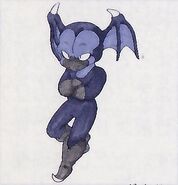 Artwork of an Imp in the Japanese manual of SaGa 2: Hihou Densetsu. 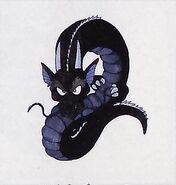 Artwork of a Baby-D in the Japanese manual of SaGa 2: Hihou Densetsu.
Add a photo to this gallery 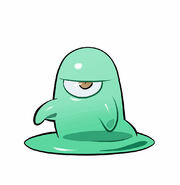 Artwork of a Slime. 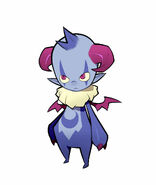 Artwork of an Imp. 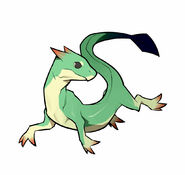 Screenshot of a Slime.

Screenshot of an Imp.

Screenshot of a Mini-Ryu.
Add a photo to this gallery