Some axe techs such as Wood Cutter

Nighthead(ナイトヘッド "Knight(?) Head") is an enemy from Romancing SaGa 2. Some of its main ways of fighting is using the powerful attack tentacles if you have a weak character they will surely be killed by it. Its other means of attack is using the fusion magic spell sandstorm though it rarely uses it but when it does the damage can sometimes be crippling and it has the added effect of blinding its enemy. This monster is weak to the axe techs wood cutter and pine chop special. 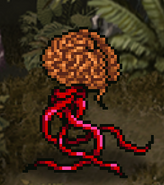 The Nighthead in the Romancing SaGa 2 re-release.