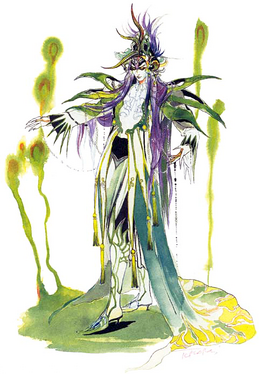 "Trying to steal my kingdom from me? That's it! Lust for power! That's my daughter! Now, take your best shot, you'll need it."
—Orlouge

Orlouge (オルロワージュ, Orurowāju?) is one of the main antagonists of SaGa Frontier. He is the main villain and final boss of Asellus's storyline.

Orlouge is one of the Mystic Lords, having the title of Charm Lord. He rules over Facinaturu, from inside his Chateau Aiguille, where all other mystics under his rule are forced to live. He usually kidnaps young women and turn them into his mystic princesses, never allowing them to leave. He has about 60 princesses under his rule. He also has three mystic princes who serve him, Ciato, Ildon and Rastaban.

Only one of his princesses ever managed to escape him. Orlouge pursued her, but his carriage accidentally ran over a human girl named Asellus. In order to save her, Orlouge gave her his own blood and took her to his chateau. When she woke up, she had become the world's first half-mystic. Orlouge called her and ordered Ildon to watch her, while ordering one of his princesses, Princess White Rose, to teach her the mystic customs. Asellus eventually decides to run away when Ciato tell her of a guy who could take her out of Facinaturu. White Rose goes with her, and the two manage to escape. She tries to go back to her home, but finds out that 12 years have passed ever since her accident.

Orlouge immediately orders Ciato to capture and bring them back, so Ciato sends three shadows after them. After Asellus defeats the shadows, Orlouge wakes up the Lion Princess and orders her to capture her. After Asellus defeats the Lion Princess Ildon decides to help her, as Ciato had imprisoned Rastaban and was going after them as well. Asellus confronts Ciato and defeats him, so Orlouge uses his powers to trap them in his Dark Labyrinth, where they couldn't escape from. White Rose, however, decides to remain in the labyrinth so Asellus could escape.

Asellus finally decides to settle the score and goes after Orlouge to fight him. She returns to Facinaturu and fights against Ciato and the Lion Princess again, finally confronting Orlouge for the last time.

Asellus' ending will depend upon what the player did during the game. In her full-mystic ending, she overthrows Orlouge and become new ruler of Facinaturu, becoming even worse than Orlouge, while in her full-human ending she leaves Facinaturu and dies a s a human. The canon ending, however, is the half-mystic ending, where she becomes the new ruler of Facinaturu, yet becomes a kind one.

Orlouge appears as an obtainable card.

SS Style in Romancing SaGa Re Universe from UDX Gacha