Peony (ようせい, Yousei?) is a character from Romancing SaGa 3. She is a minor playable character.

Peony is a fairy from Fairyville who finds herself trapped in a cage at a traveling caravan. The player character has the option to free her from captivity.

Peony is a fairy with a youthful appearance. Although she has the appearance of a young girl, the fairy species is widely considered to be genderless. Her face resembles that of a young girl. She is commonly depicted with brown hair tied with an intricate braid on the sides of her head. These braids are usually fastened with an assortment of white roses and varying flowers. She has red eyes and long, pointy ears. She wears two golden ball-shaped earrings. She wears a black choker laced with a pink flower. She wears a strapless white and flowing dress. Her white wings are accentuated with an intricate purple and white pattern and complement her dress. She wears black wristbands on both of her wrists. She wears black boots that have a white finish around the heels.

Artist variations on her outfit show it to be an assortment of green and yellow which is accented by purple ribbons lined with flowers by her waist. Her wristbands are more stylized, showing a lace finish.

Unlike the other denizens of Fairyville, Peony does not exhibit the mischievous behavior typically expected of fairies. Possibly due to being held captive at the troupe for an undisclosed period of time, she has developed a meek and sorrowful disposition. After being freed from her cage, Peony becomes much happier, although she is still not as childish as the others in Fairyville, deciding to maintain a calm demeanor toward the visiting protagonist.

Peony is first encountered at night by the protagonist. After visiting the traveling troupe, the player character sleeps away at an inn and hears a beguiling sound. The protagonist follows the sound and finds the source to be Peony, held captive in a small cage. They can choose whether or not to release her.

Freeing Peony releases her from the troupe and allows her to go home to Fairyville, resulting in the troupe losing their main attraction. The protagonist can encounter her in Fairyville following these events. As she is grateful to the protagonist for freeing her, she offers to join their party. Recruting her for the first time in the remaster grants the player the "Mischievous Forest Fairy" trophy, which is slightly misleading considering she behaves nothing like her brethren do.

Peony is one of the fastest characters in the game and uses bows, spears, and epees with ease. Setting the party to the Whirlwind formation allows her to eviscerate enemies before they can take a turn. Peony is a great candidate for the Everfrost Blade because of her high speed. However, she suffers from having one locked armor slot, only 7 LP, and being weak to anti-air arts. Caution should be exercised before committing to making her a full-time ally.

Peony can be first found in the traveling freak show after the player has gotten their HP to 500 or more. Once the requirement is met, the freak show will appear in almost any town near one of its exits via a sign that advertises them. This whole process is crucial to recruiting Peony. She is the only one in Fairyville who tells the truth about which color of butterflies to follow in the Jungle in order to find the Fire Fortress of Aunus. One can immediately get Peony as soon as you free her, provided you find both Fairyville and Fire Fortress beforehand. In doing so, she will immediately offer to join your team when you speak with her.

Peony appears as an obtainable character.

Peony is strong as a bull, but also as fragile as a mosquito, and fast like one too. Her High Soldier counterpart begins with only 12 defense, the lowest for a club user. In her King counterpart, there is little difference, with only a defense level of 18. She has a terrible sparking rate, and as such it is rare to make her learn arts. The best way to make her more powerful is to use the dojo.

Peony appears as an obtainable character as an SS unit only. There are two versions: one is a unit from the normal gacha pool, while the other is from the Half-Anniversary/Anniversary pool. 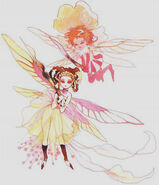