Princess White Rose (白薔薇姫, Shiro Barahime?) is a mystic female in SaGa Frontier who is one of Charm Lord Orlouge's princesses. She lives in Chateau Aiguille in Rootville, the capital of Facinaturu. Unlike most mystics, who tend to be loners and keep to themselves, White Rose is very kind, friendly, and has nothing against humans or other races. She is a stark contrast to Chateau Aiguille's otherwise gloomy and dark setting.

She is awakened from her coffin to accompany Asellus in her new life in Facinaturu. After finding a pilot who could help her escape, Asellus asks for money, and White Rose gives her some gold. They go through the Facinaturu Floor and escape via a plane to Owmi.

In Owmi, they meet Mesarthim, and help her escape the Lord Manor. After that, they travel to Shrike. There, Asellus learns she was presumed dead for twelve years. A Fire Sage sent by Ciato comes to retrieve White Rose. The mystic was willing to return to Facinaturu, but Asellus defeats the Fire Sage.

After a few encounters with the sages, Lion Princess, and Ciato, Asellus and her party are trapped in the Dark Labyrinth. White Rose stays behind, allowing the others to escape, as she feels it is her punishment for disobeying her lord.

In the human and half-mystic endings, Asellus releases her. She is presumably still trapped in the mystic ending.

Asellus and White Rose are rescued during Zozma's attack on Trinity Base. They join Emelia afterward.

They are on board the Cygnus when Nomad and her pirates hijack the ship. They help Red retake the ship. Afterwards, they part ways. 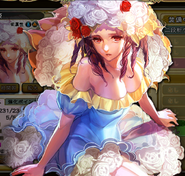 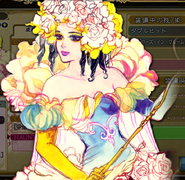 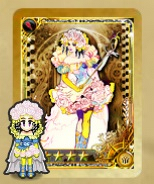 Sprite.
Add a photo to this gallery

SS-rarity - [Here, This Is for You] Princess White Rose.

Render.
Add a photo to this gallery

Retrieved from "https://saga.fandom.com/wiki/Princess_White_Rose?oldid=35334"
Community content is available under CC-BY-SA unless otherwise noted.