Raphael (ラファエル, Rafaeru?) is a minor playable character in Romancing SaGa and Romancing SaGa: Minstrel Song. He was born in the Knights Dominion and can be found at Eugenstadt Castle.

He is voiced in Japanese by Sôichiro Hoshi and in English by Liam O'Brien in the remake.

Raphael has long blue hair, silver armor, black/purple leggings, and a yellow cape (red in his battle sprite) to top it all off. His battle sprite has him presented with darker skin colour, which is innacurate to his artwork.

In Minstrel Song, Raphael has brown hair, a black coat, a black pair of pants and some shoes, all with multiple white markings.

Raphael is characterized as courageous and love driven, though seemingly not very experienced as cited by a few civilians. Despite that, he shows great pride in fighting against evil, being ashamed of himself when failing to do so, especially when it affects his loved ones.

A knight in training, Raphael has much to learn about being a knight, and is tasked with various duties to achieve this goal. Raphael's first appearance is during "Pride of the Knights", where he accompanies Lord Theodore to the Abandoned Keep Dellsdale, to rid it of monsters. If you have 2 spare slots in your party you can temporarily recruit both Theodore and Raphael, however, they will leave upon completing the quest.

Raphael is romantically linked to Constance, daughter of Lord Theodore, and eventually marries her late in the game. This relationship leads to his imprisonment during "Constance Kidnapped", but after successfully completing the quest he is released.

He becomes recruitable after completing the quest "Theodore's Madness", and also triggers the later "Dragon Knight" quest. He can be found in Eugenstadt castle, should you wish to recruit him.

Raphael starts out with 50 HP, equipped with an iron sword, bronze armor and a wooden shield.

Raphael appeared as an obtainable character.

Raphael appears as an obtainable character.

Raphael begins with high HP, but to compensate this, he starts with low defense. His attack is always average, but nice anyways, same for his agility. High Soldier Raphael is capable of handling up until 5 Star Missions. Use him until you get Emperor Gerard, Harid or Albert, since he is an very stable character.

Artwork of Raphael in Imperial SaGa.

Artwork of Raphael in Imperial SaGa. 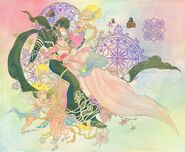