Ren and Emelia were a couple that was soon to be married. However, Emelia found Ren's corpse at his house, murdered by an unknown assailant. While being interrogated for Ren's murder by his coworker, Emelia was sent to prison for the crime of killing Ren.

Ren is later revealed to be alive, serving as the vessel for an entity known as Joker. He pleads for Emelia to end his torment by destroying the cursed mask. Ren can die depending on how the player has nurtured Emelia's weapon capabilities.

After destroying the mask, Ren survives the outcome and marries Emelia, with Annie, Liza and Roufas in attendance.

Ren appears as an obtainable character. 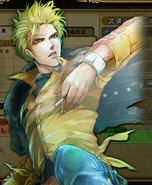 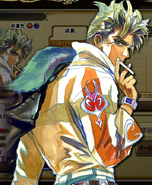 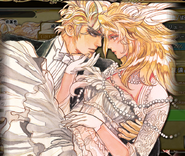 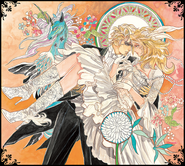 Screenshot of Annie, Liza, and Roufas at Emelia and Ren's wedding.