Rich Knights (リッチ・ナイツ, Ricchi Naitsu?), also known as Richard Knights (リチャード・ナイツ, Richādo Naitsu?), is one of the playable main characters from SaGa Frontier 2. He is the only son of Wil Knights and either Cordelia or Labelle if Cordelia dies. Being the son of the famous Wil Knights he hates being referred to as the "Tycoon's Son" and eventually sets out to become a famous digger himself.

Rich is very headstrong much like his father. He never wanted to live in Wil's shadow and left home to strike it out on his own. Unlike Wil, Rich is a more worldly figure on the outside, being a hopeless flirt and getting himself in trouble with his two-timing. He tries to come off as more experienced and dashing than he really is. Despite that, Rich still has a heart of gold buried underneath as he is quick to help those in need and is hesitant to strike down Misty despite being controlled by the Egg due to her being an innocent. While he can come off as egotistical, Rich still bears the family's self-sacrificing streak in the end.

He is first seen accompany the Digger Eleanor as one of her traveling companions before he sets off to the North Lands to make a name for himself. Rich contrasts himself from his earnest father by being a bit of a playboy, something referenced by his mentor and several NPCs. In the Northern lands, he meets and becomes the lover to Diana, as well as helps Julia fulfill her dream of seeing the Water Aqueducts flow again in her homeland.

After his initial success he stumbles across the Egg, finally finding the Quell his father searched for so many years ago. However, the Egg appears to be in the hands of a young woman called Misty. Due to Wil's obsession with the Egg, Rich chooses to not to help him in the pursuit of it, partly because Rich is concerned with the life of the Egg's host. Eventually, Rich realizes the Egg is too dangerous to be ignored as it begins experimenting on the local populace.

Rich's wife Diana announces he is to become a father, but Rich is too preoccupied with finding Misty and the Egg. He ventures off into the Northern continent for a showdown with Misty, as his daughter Ginny Knights is born. A showdown he never returns from...

Rich is a capable fighter with high growth potential with sword and spear arts, as well as being one of only a handful of characters with proficiency in all spell types. His HP is average but he has high WP and SP growth.

For all the above reasons, Rich can be developed into any kind of fighter needed and will likely dominate in the category for his sections of the game. It is advise to give him Life Water and possibly a few support spells regardless of whether you want him to specialize in Weapon or Spell Arts, due to several of his scenarios involving character who start off significantly weaker than him.

His ideal roles will likely depend on what the player chooses to develop him as, but due to the high amount of duel boss battles within his scenarios, it is advised to give him Heavy Attack or Heavy Spell to buff his damage potential.

Rich appeared as an obtainable character.

Rich appears as an obtainable character.

Rich appears as an obtainable character. The regular versions of Rich are obtainable as gacha units from the regular gacha pool.

Rich appears as an obtainable card. 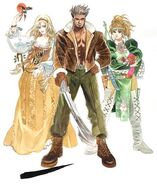