Robin (ロビン, Robin?) is a character from Romancing SaGa 3. He is an optional playable character. He is located in Yamas and is first seen in the quest called The Adventures of Robin. He protects Yamas and acts as a hero of sorts to the town stopping any crime or bad guys, He at one point also saves Fat Robin who with a failed attempt tried to be the hero.

Robin is the closest to a medieval superhero. He wears a long black cloak, a black jacket, yellow pants, and black leggings. He also tops off his persona's look with a black mask and a cap with the letter "R", to emphasize his persona.

Robin is a stereotypical hero, saving those in need from the corrupt Dophomore firm. His demeanor is exagerrated, to emphasize his superhero origins.

After the quest Robin can join by entering the warehouse where you first saw him stopping a crime when going in either Fat Robin will appear or he will appear sometimes. Simply exiting the building and entering again will eventually change up which Robin appears.

Robin appears as an obtainable character. The regular versions of Robin are obtainable as gacha units from the regular gacha pool. 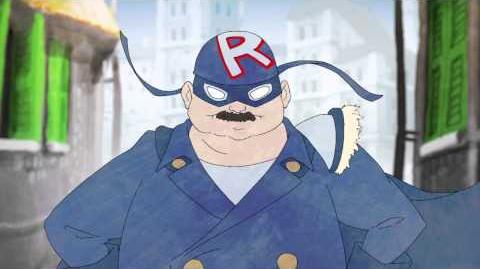 Both Robin and Fat Robin's true identity might actually be the worker in green shirt and the Keeper in the Yarmouth Pub. If Player has slimmer version of Robin in the part, The worker will never shown up. Same goes with recruiting Fat Robin will make the fat owner of the pub disappeared until player part with Fat Robin.

Retrieved from "https://saga.fandom.com/wiki/Robin?oldid=33540"
Community content is available under CC-BY-SA unless otherwise noted.