"You came to rescue me! And what's more, made it all the way here past the monsters without a hitch. Since you are so strong... I would ask of you a favor. There is a monster blocking the path in the shrine. Could you do something about it for me?"
—First meeting with Rocbouquet

Rocbouquet has a great interest in treasure and is trying to solve the secret of an ancient temple in the jungle at the time the player encounters her. She has control over all the men in the jungle village Eirunep. She would have been the queen of Salamat.

Her signature move is Temptation, which charms all male party members.

Prior to the events of the game, Rocbouquet was present in the Forgotten Village and had served as one of the Seven Heroes. At some point, the Seven Heroes started using their powers against their own people. The Seven Heroes were banished via a device that transferred them to another dimension.

After thousands of years had passed, the Seven Heroes returned from the other dimension to wreak their vengeance on the world.

Rocbouquet went on to conquer Eirunep and become its queen, seducing all of the men in area to do her bidding. As a result of her actions towards the people of Eirunep, the Amazon have grown wary of her presence.

It is later revealed by Orieve that the defeated hero was actually a clone of the original hero. Rocbouquet is ultimately defeated by the Emperor when her true body is decimated in the final battle.

She is one of the weakest of the seven in both her second form and her first. She, however, still should not be taken lightly, as she has very high magic power and can do massive damage in her first form. Her attacks mainly consist of wind dart, a single target wind magic attack. She can do high damage with it and her Temptation, but if your team is all female, which it should be for her, (unless it is your first encounter in the dungeon you encounter her in, in which the lead must be male to fight her) then there is no need to worry, and it causes her to waste a turn. In her second form, she has the powerful call thunder magic. It can hit all party members and has a chance to instantly kill them. Care should be taken for her second form to reduce some of the damage taken from thunder magic. Air Screen should be used and of course, again, have an all female team as she still has Temptation. The Moleman and Salamander also work well, as the Moleman has the iron will, which protects him from all mental status affects, and the Salamander is female.

Equipping the Somon Ring can also negate Temptation if one wishes to take her out as soon as possible. The Demonstone Ring can also be used, but can never be removed and costs 1 LP from the party member equipped with it every time you stay at an Inn, unless you sleep in Gerard's Room.

Rocbouquet has appeared in the following games throughout the SaGa series:

Rocbouquet has had key guest appearances in the following non-SaGa games: 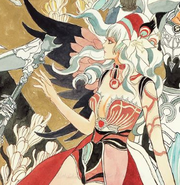 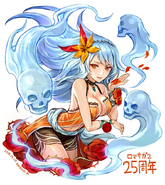 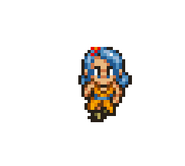 Rocbouquet (human) without armor; from the Romancing SaGa 2 manga

Rocbouquet as depicted in the Romancing SaGa 2 manga

Rocbouquet and Noel as depicted in the Romancing SaGa 2 manga

Rocbouquet as depicted in the Romancing SaGa 2 manga 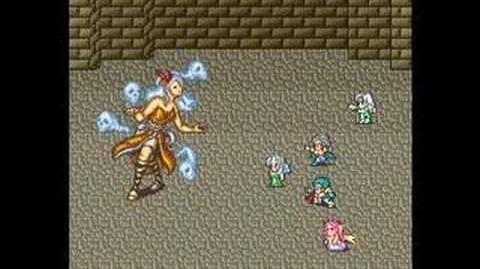 Romancing SaGa2 7Heroes Battle ~Rockbouquet(Type1)~
An example of a battle with Rocbouquet in her first form. 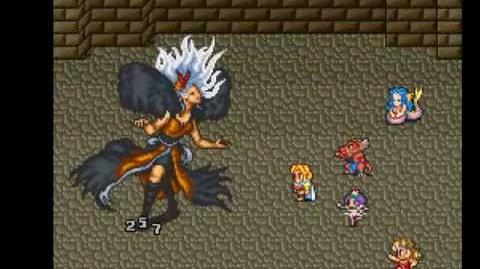