Romancing SaGa (ロマンシングサ·ガ) is a role-playing video game originally developed and published by Square as the fourth game of their SaGa series in 1992 for the Super Famicom. The game was designed by Akitoshi Kawazu who had served as head developer for the previous SaGa titles, with fellow series veteran Kenji Ito providing the game's soundtrack. The original Super Famicom version sold over a million copies worldwide and was voted by readers of Japanese Famitsu magazine as the 53rd greatest game of all time in a 2006 poll.

The game was later ported to the WonderSwan Color handheld system in December 2002, being exclusive to Japanese players. In April 2005, an enhanced remake of the title for the PlayStation 2 called Romancing SaGa: Minstrel Song was released in April 2005 in Japan, and in English for the first time in North America the following October simply under the title Romancing SaGa. In 2009, the original Super Famicom version was ported to mobile phones and the Wii Virtual Console service in Japan.

The game serves as the basis for most of the series that comes after, featuring the ability to choose between eight different characters to play as, a non-linear adventure with free access to the whole world, dozens of quests to embark on, and a unique leveling system. It is also the first entry that Tomomi Kobayashi did character designs for, and established her as the main character designer for the franchise.

Romancing SaGa is a non-linear RPG more in line with Western RPGs than Final Fantasy. At the start of the game, the player is given the option of assuming the role of one of eight main characters, each with their own strengths, weaknesses, and starting points throughout the game's world. In addition, the player must select the profession of the character's parents from a list of eight choices each, which go towards determining their stat growth and roles in combat.

Romancing SaGa begins a staple of the SaGa series, both gameplay and story are largely open-ended, giving the player the ability to play through scenarios in a number of different orders, with some areas and portions of the narrative only becoming available once they have spoken to specific characters or performed certain tasks. The Event Scenario System is a hub of different quests lines the player can choose to partake in to advance the game. Completing quests will advance the time of the game unlocking new quests and tallying up Karma points by your actions to determine which of the two final scenarios you unlock. Some quests are exclusive to certain party members, while others can only be completed within certain time windows within the game. Battling monsters will also advance in-game time as well with weaker monsters not so much but more difficult monsters advancing by a fair bit. The player must then balance out battling and quests to see all the content the game. By completing story objectives and meeting new characters, the player is brought closer to the game's end, leading to the final confrontation where they must use all of their acquired skills to succeed.

While traveling through dangerous environments, the player's party can do battle with enemy monsters which roam around the screen and will enter combat when touched. Using a turn-based approach to combat, battle scenes are played out by having the player input commands for each individual party member at the start of each round, with the selected actions taking place in accordance with a character's "speed" statistic.

The player can have up to six characters in a party including their "main character" they chose. Characters can be equipped any of the ten available weapon classes, and four of the eight magic classes. Weapons will gain proficiency levels as the character uses them and can learn up to four Weapon Skills depending on weapon class and the strength of the weapon. Unlike most installments, weapons do not degrade, but Weapon Skills have a limited amount of uses and equipping a new weapon, even of the same weapon class or simply equipping and unequipping the same weapon will erase all weapon levels and skills.

Magic must be purchased in shops or shrines, with only certain places containing the highest level spells. While the the game appears to use a Vancian Magic system, the game actually calculates magic through an MP type system common to other Square RPGs. The actual spell uses one sees simply shows you how many times a spell can be used, but using any spell of the same magic type will lower the uses of other spells of that same type. All magic have their own MP pools though, so using up one type will not hinder a characters ability to use other spell types. Unique to SaGa, a character cannot use two magics of opposite types. Trying to teach Water Magic to a character using Fire Magic will erase all of their Fire magic ability unless relearned. This means that while characters are free to use any of the eight magic types, they can only use four types altogether.

Romancing Saga also utilizes a unique 3x3 grid formation system. The player assembles their team in one of three rows available in order to make the most of the characters weapons, magic, and stat build. Most weapons can only be used in the front row with spears being usable in the second row, while bows and magic can be used in any row including the back row. Certain Weapon skills also have ranges, so the player should set up their team accordingly. If the player is engaged in a battle with monsters by having the monster touch them from the side or behind on the dungeon map, the row configuration of the party will be scrambled. The player should either outfit the team with multiple weapons or give everyone magic in order to battle from any formation, or they can use the Forward and Backwards command to fix the placement of their team at the cost of that characters turn.

Another unique mechanic is the Jewel system. A player's team can only hold up to 9999 Gold at which point they won't collect anymore money from battles or treasure. If the player sells an item while their money is at max, the money will be converted into a Jewel, which will allow the player to acquire money again until they need to convert it back into a Jewel. Some items like the Ice Sword require more money than the player can technically hold, so acquiring Jewels is imperative. Jewels still act like normal money otherwise.

Romancing SaGa is set in the fictional world of Mardias, which was created by the God Marda. Long ago, war raged between three wicked gods, Death, Saruin, and Schirach, and the lord of all gods, Elore. The battle grew so fierce that many gods fell, until only Elore and Nisa remained along with the three wicked gods. At the end of that long conflict, Death and Schirach were stripped of their powers, and Saruin was imprisoned through the might of the ten Fatestones and the hero Mirsa's ultimate sacrifice. For his great deeds, Mirsa was transformed into a fellow god to live with them. Nisa and Elroe then set out to restore the world. The devastation so great, that all the gods swore an oath to never wage war with each other again.

A millennium had passed, and the Fatestones were scattered throughout Mardias. All this time the powers of evil festered, bent on releasing Saruin from his prison. As his agents cause strife to erupt across the land, eight heroes emerge, all of them simply engaging in their own lives until fate swept them up into a conflict with Saruin's return.

The game features eight central playable characters. At the start of a new game, the player may choose which of these characters to follow as the main protagonist, and customize that character's attributes. Characters not chosen by the player cannot be directly customized, but can still be encountered and added to the player's party.

In September 2000, Square announced it had begun development on an enhanced version of Romancing SaGa for the Bandai WonderSwan Color handheld system. According to the company, some of the original Super Famicom version's planned material was unable to be added during its original release due to memory restrictions, and that the new hardware would allow for a more "complete" version of the game. The newly added material includes an additional story scenario, as well as a side-quest that allows the player to gather all ten "Destiny Stone" items where previously only a few were accessible. While gameplay and audio are identical to the original release, the game's graphics were enhanced to accommodate the system's larger color palette. The game was later released on in Japan December 20, 2001.

Romancing SaGa: Minstrel Song was developed in 2005 and featured several changes to the game such as adding in gameplay mechanics from later installments, a new redesign of the characters, 3D Graphics and Voice Acting. It was released in the West the following year and marks the only version of the game released outside of Japan. In the West it was simply called Romancing SaGa. 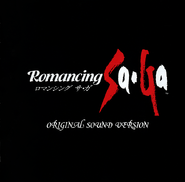 Official art of all 8 main characters of Romancing SaGa.