SaGa Wiki
Register
Don't have an account?
Sign In
Advertisement
in: Articles under construction, Games, Games By Square, Romancing SaGa 3

Single-player
Romancing SaGa 3 (ロマンシング サ・ガ3, Romanshingu Sa・Ga 3?) is the sixth title in the SaGa series released originally in 1995 in Japan for the Super Famicom. A remastered version of the game was first announced late 2018. The global release had been announced for release in 2019 at E3. The game's global version was released digitally on November 11, 2019.

"The Rise of Morastrum--an event where the dark star blocks out the sun--threatens the very existence of our world. All born in that year are doomed to perish before its end.

However, during the first Rise of Morastrum 600 years ago, a sole child did survive. He came to be known as the Archfiend, leading the world to ruins.

Another 300 years passed, and again a child defied fate. She came to be known as the Matriarch, defeating the evil and bringing peace back to the world.

Now, 300 years later, the Rise of Morastrum strikes again, and the fate of the world hangs in the balance.

Will there be another child of destiny? Will the child be righteous, evil, or another force that the world cannot fathom?

And now, we relive the grand story revolving around the “Child of Fate” who survived..."
—Official English website

At the beginning of the game, there are 8 main characters to choose from. However, as you explore the world, you will meet many different individuals who may aid you in combat.

The plot revolves around an event named "The Death Eclipse" which hits the Earth every 300 years. The Star of Death is a star that travels before the sun, occurring a deadly eclipse. Blocking the sun, it then radiates a powerful energy that kills any newborn life on the planet, be it plants, animals, monsters, or humans. However, one day, about 600 years ago, when the Death Eclipse hit the land, a newborn human child survived before the mortal grasp of the star. Gifted with incredible power, this child grew up and became a powerful king, naming himself "The Devil King". He ruled with an iron fist over the land, lavishing terror all over the land and destroying countries that didn't pleased him. With Pidona as its capital, he ruled the world, and eventually even opened the Abyss, freeing the fearsome Devil Lords to serve him. But one day, the Devil King vanished, and the Devil Lords were left without anyone to contain their infinite maliciousness. So they started a rule of destruction and terror over the condemned world. However, 300 years after the last, the Death Eclipse occurred again. And then again, a single child survived and been blessed by the Abysses. However, he didn't grow as a devil this time. Growing up in a desolate land ruled by the Devil Lords, he became a true hero, and supported by many strong allies and legendary artifacts, he became the Holy King and vanquished the terrible Devil Lords, which were brought back to the depth of the Abyss, once again closed. This all started a new age for the world under the peaceful watch of the Holy King. However... Around 15 years, the Death Eclipse occurred at new, and the time when the blessed child will be revealed drew nigh. No one knew yet who it is, and if he will be a King of Salvation... Or a King of Destruction.

Romancing SaGa 3 is the sixth game in the SaGa series (third and final in the Romancing SaGa trilogy). The main characteristics of the series are an emphasis on non-linearity and replay value. In the beginning, the player chooses which of the 8 main characters to play as, each with their own storyline and perspective. Not only does the player journey through their selected character's story, but there's also a great deal of side quests they may choose to complete. The only connection between the three Romancing SaGa games is the presence of The Bard, mascot of the entire Romancing trilogy, only playable in this game.

A fan-based English rom translation project for Romancing SaGa 3 was completed in the summer of 2000 by Mana Sword. In 2017, Kawazu announced the game would be getting a remaster on mobile devices and PlayStation Vita. When asked by a fan concerning a Western release, he tweeted that it would be coming but not until after the Japanese release and that he wouldn't be able to discuss anymore until after the release of the remastered Romancing SaGa 2[1]. At the 2018 Tokyo Game Show, Square-Enix revealed that Romancing SaGa 3 remaster was going to follow suit with Romancing SaGa 2 and be released for all current gaming consoles in addition to the announced PlayStation Vita, PC, and mobile versions. It was released worldwide on November 11, 2019[2]. 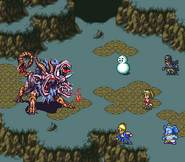 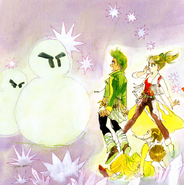 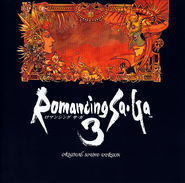 Romancing SaGa 3 is coming West for the first time!-1