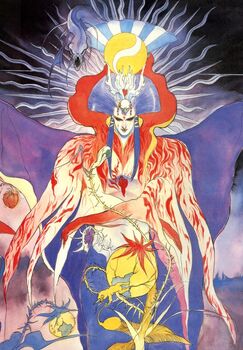 Saruin (サルーイン, Sarūin?) is a God and the primary antagonist in Romancing Saga and Romancing SaGa: Minstrel Song.

He is the brother of Death and Schirach.

Saruin is a God with pale white/grey skin, and a visibly muscular build. While his overworld sprite and artwork show him in a white cloak with red markings in the shape of fire, his battle sprite shows him mostly exposed with a black and red cloak hanging from his torso and under.

Saruin is shown to be have a superiority complex, as he is unwilling to believe his failure against Mirsa was anything more than a setup by Elore. He is not prone to critisism, and he hides in a fit of smugness against the protagonist when they challenge him in battle.

Prior to the events of Romancing SaGa and Romancing SaGa: Minstrel Song, Saruin and his siblings were created from the remains of a defeated Saiva. Saruin was born from her heart, becoming the most insidious of the siblings. They marched on to conquer and ravage Mardia. Elore had tasked Mirsa and his band of followers with eliminating Saruin and sealing him away.

Saruin is sealed by the Fatestones in Quietus, which lies beneath the Isthmus. Saruin and his siblings sought to conquer the world of Mardias.

Saruin is one of the most powerful Gods; he created many beings to aid him in the destruction of the world and Elore. He created many powerful monsters, the most notable were the Four Elemental Lords whose powers rival those of the Gods. His first creation was Pyrix, lord of flame, Adyllis, ruler of earth, Strom, serpent of water and Avi, master of wind. He was betrayed by the Four Elemental Lords as they refuse to aid him in his cause.

He then created a Fatestone and placed it inside another of his creation, Jewel Beast. The beast consumed the Fatestone, went mad and attacked, seriously wounding Saruin in the process. He then sealed Jewel Beast in the region of Frontier. Afterwards, Saruin created his most dangerous monster, Soulgutter; an undead monster with no soul that consumes the souls of all living things. Death could not allow his brother's creation to defile the souls of the living. Because Soulgutter had no soul, it could not be killed, only sealed. Death gave the mortals a Rite to seal the creature with the aid of the Giants an Altar was created to contain Soulgutter on the Steppes of Galessa. Unsucessful with all his former creations, Saruin then created an army of lizards that he brought up from the ground: the Gecklings, which he taught to walk upright and how to fight, aided him in the fight against the other Gods. He fought Mirsa, but was sealed by the Fatestone that Elore gave to Mirsa and his companions.

The player (after beating the game once at least), can offer up FateStones on the altar in Quietus to make Saruin stronger. With enough Fatestones, he becomes the strongest boss in the whole game.

Saruin appeared as an obtainable character.

Saruin appears as an obtainable character.

Saruin appears as an obtainable card.

Saruin's final form as he appears in Imperial SaGa

Artwork of Saruin alongside Schirach, Death and a Saruin Minion. 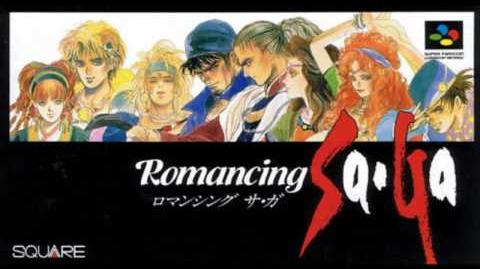