Schirach (シェラハ, Sherah?), also known as Schiele (シェリル, Sheryl?), is a non-playable character from Romancing SaGa and its remake, Romancing SaGa: Minstrel Song. She is the second oldest of the three Gods of Evil. It is also hinted that she may be the most powerful of the three.

She is voiced in Japanese by Junko Minagawa in the remake.

In her most recognisable form, Schirach has absurdly long hair, which is tied into a ponytail, with two more ponytails on the front of her head. This might be a hint torwards her creation. She wears a red cloak ontop of her pure black tunic. She does not have any footwear.

In Minstrel Song, her Schiele form has a noticeably larger red cloak, which is more of a hood or a tunic in that regard, while also sporting a red hat with an emblem, black pants and red shoes; clothing matching one hailing from the Kjaraht region of Mardias.

In her Schiele form, Schirach is a very melancholic person, due to her losing everyone she knows and loves in some way.

After the battle of the Gods, Schirach and Elore met. Her powers were so great that if left unchecked, she would bring ruin to the world. It is said that her power of darkness rivaled Elore's power of light. Both the Red and Silver Moons were created to weaken her. It was afterwards that Elore and Schirach made a deal; she was given a Fatestone, the Diamond of Light. When her power of darkness met Elore's power of light, they cancelled each other out, thus rendering her harmless. It was then that she was turned into a mortal girl named Schiele. Thus, she traveled the world as Schiele under the watchful eye of Elore.

Schiele has a tragic past, and everyone she meets has an unfortunate death and is tormented by countless accidents that takes the lives of the people closest to her. She is filled with despair and fear of her own power throughout her life. As Schiele, she has only known sadness. In the quest to gather the Fatestones, Scorn attacks Schiele while she shares a tale of the passing of someone she held dear with the Heroes. The lead will fight against Scorn to protect her. Win or lose, she will forcibly take the ring off in exchange for the safety of the lead character. This causes her to reawaken as Schirach. Now returned to her old self, she fears the the world will be engulfed by her darkness. She asks the Heroes to defeat her and put her back to sleep. With her defeat, she returns to being a mortal and falls into a deep slumber.

In the Wonderswan Color remake, the method to fight her is alot less complicated, as she is sitting in the bar with the option to fight her at any point. While no translation has been located so far, it seems like Schiele offers the option to take off the Diamond ring, doing so resulting in a boss fight.

Video of the Wonderswan Color battle with Schirach

In Romancing SaGa Minstrel Song, Schirach is one of the strongest opponents in the game. Both her CHA and INT stats are 99 and her techniques can inflict status ailments. Hymn of the Night Wind inflicts Phobia, Black Book inflicts Sleep, and Dark Temptation inflicts Charm and can take HP/LP from the Target. She can also inflict instant death with Abyss.

Video of the few cutscenes with Schiele and the battle with Schirach: Part 1, Part 2.

Schirach and her alter-ego Schiele appeared as obtainable characters. 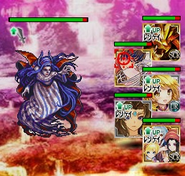 Schirach and her alter-ego Schiele appear as obtainable characters. 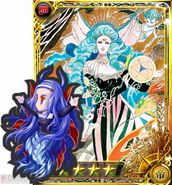 Schirach appears as a boss fight on floor 150 of Spiral Tower.

Schirach appears as an obtainable card. 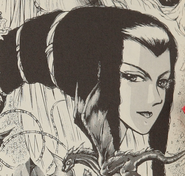